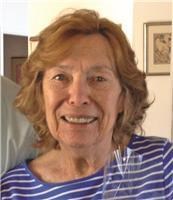 BORN
1928
DIED
2021
Margaret Elizabeth Sideris
Margaret Elizabeth Sideris (nee Hines) of Santa Ynez passed away peacefully with family by her side, on May 25, 2021, at the age of 93.
Margaret was born in New York on May 13, 1928, to Rose Hines (nee Reilly) and Charles Albert Hines. She grew up in New York City with her older sister Catherine, brother Charles, and little brother Edward ("Eddie"). She was active as a child and enjoyed playing with her siblings.
After graduating high school, she entered Hunter College and worked at Macy's department store, until meeting the love of her life, James ("Jim") P. Sideris in 1950. Margaret and Jim
married in 1951 and lived in New York City. They enjoyed going out with friends, especially dancing, and spent a lot of time with family. They started their own family in 1952 with the birth of their first child, James. Margaret became a homemaker, and they had two more children, Kenneth and Elaine.
By 1963, they moved to a nice, rural neighborhood in Ringwood, New
Jersey, where Margaret, Jim and the children thrived. Margaret became an active volunteer in their Catholic parish and children's school. She also volunteered at the neighborhood library, and with her daughter's girl scout troop. It was during this time in New Jersey that Margaret sharpened her sewing skills, learning from Jim's mother, who was a seamstress. Margaret made most of her and her daughter's clothes, designing many of them from clothing she saw in magazines.
Jim's work moved them to Massachusetts for the next few years. It was there that Margaret worked as a teacher's assistant at her children's school. Soon afterward, they moved the family across the country to Rancho Palos Verdes, in Southern California, where Jim ran his own business. While
Margaret missed her mother and siblings, she knew it would be a good move for the family.
And indeed, Margaret, Jim and the family continued to thrive in Southern California, living just miles from the Pacific Ocean. Within a few years, Jim's mother, Demetra, came to live with them. Margaret and Demetra, who was also a top-notch seamstress, worked together to design and sew custom dresses and clothing for local women. Sewing was truly a passion of Margaret's, which brought her much satisfaction and self-accomplishment. She continued to sew into her 90's and was always looking forward to the next sewing project.
Jim and Margaret retired to Santa Ynez, California, in 2000, and they continued to enjoy trips to some of their favorite places in San Francisco and Las Vegas, and thoroughly enjoyed spending time with their three children and their families, as well as collecting antiques.
Margaret is survived by her son Jim Sideris, his wife Nancy and granddaughter, Lynette; her son, Ken Sideris, his wife Lida and grandsons Jordan,
his wife Danielle, and Shane, his wife Nikki; and their daughter Elaine Adam (nee Sideris), her husband, Barry, and granddaughters, Elyse and Michelle, grandson Brent, his wife Chandel, and great granddaughter Weslyn; as well
as her nephew Stephen and nieces Carol and Laurette and their families, and her husband Jim's sister, Mary. Her true love and husband of 69 years, Jim, predeceased her on October 1, 2020.
Published by Palos Verdes Peninsula News on Sep. 1, 2021.
To plant trees in memory, please visit the Sympathy Store.
MEMORIAL EVENTS
To offer your sympathy during this difficult time, you can now have memorial trees planted in a National Forest in memory of your loved one.
MAKE A DONATION
MEMORIES & CONDOLENCES
Sponsored by Peninsula News.
0 Entries
Be the first to post a memory or condolences.