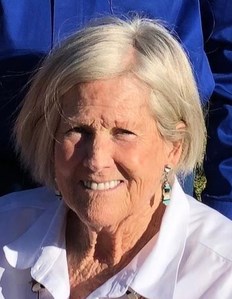 FUNERAL HOME
Osborn Funeral Home - Shreveport
3631 Southern Avenue
Shreveport, LA
May 28, 1943 - Dec. 16, 2021 Priscilla Goodale Regur, 78, died on Thursday, December 16, 2021, in Shreveport, Louisiana surrounded by her family. Born Priscilla Anne Goodale in Phoenix, Arizona, she was a graduate of Yuma High School (Class of '61). As a child growing up in Arizona, she loved riding horses. She would often ride her horse in the Colorado River and jump hay bales in the fields. She also enjoyed "Roman" riding with her friends. Priscilla was also an avid water skier who could barefoot ski and practiced skiing tandem with her brother, in addition to synchronized swimming and ballet. She was an active member of All Saints Episcopal Church in Yuma and Phoenix where she sang in the church choir, served as a choir director, and taught Sunday School. Priscilla loved music. She knew every verse to every hymn and all the Christmas carols. Upon graduating from high school, she spent time studying in Guadalajara, Mexico. Priscilla also attended Mississippi State College for Women, until returning to Arizona to complete her Master's Degree in Education at The University of Arizona. After a chance set up on a blind date by a mutual friend, she met Steven James Regur, who was in the Air Force and stationed at Davis-Monthan Air Force Base. Steve was also attending U of A, and she helped him to graduate with a degree in Marketing by doing all of his homework for his last Government class. They married in Yuma in 1970 and moved to Phoenix, where Priscilla was a schoolteacher. She taught elementary, junior high, and special education but junior high was her favorite. They had two children- Katherine and Andrew, then moved to Rolling Hills Estates, California in 1976, where they lived for 37 years. Priscilla was very active in the horse community, serving on the Rolling Hills Estates Equestrian Committee for 35 years, and spending time riding with her daughter and her fellow equestrian friends. She joined Las Amigas de Las Lomas, a community organization supporting the Orthopedic Institute for Children where she became Horse Show Manager of their benefit hunter/jumper horse show. In her 20th year, and final year as manager, the show was able to donate $50,000 to the Institute. She managed election polling places in Rolling Hills Estates for over 20 years and was quite passionate about her political preferences. She was also the assistant manager of the U.S. Figure Skating Championships in Los Angeles, California in 2002. When her children were in high school, she became involved in costuming and set design for many musical productions, earning her the nickname "Drama Mama". In 2013 she moved with her husband and son to Shreveport, Louisiana to be closer to her daughter and son-in-law. She continued to travel with her family and add to her Native American jewelry collection. In 2019 she and her husband celebrated their 50th wedding anniversary in Jackson, Wyoming with her family. She was preceded in death by her brother, George Swayze Goodale of Buckeye, AZ. She is survived by her husband of 51 years, Steven James Regur; daughter Katherine Regur Andersen and son-in-law Corey Andersen of Haughton, LA; son Andrew Goodale Regur of Shreveport, LA; sister-in-law Suzanne Davis Hansen and husband Kenneth Hansen of Alexandria, VA; nephews Benjamin Perkins Davis and wife Jennifer Walrath of Philadelphia, PA; and Henry Bradford Davis and wife Elisabeth Rasmussen Davis, and children Bailey Elisabeth and Henry Chase Davis of Aliso Viejo, CA. The family would like to express their sincere appreciation to the Willis Knighton Pierremont Hospital, ICU and ER staff, and Shreveport Fire Department Station 19. Funeral Services were held on Tuesday, December 21 at 11:00 am at Osborn Funeral Home in Shreveport, LA. Interment followed at Forest Park West

Published by Palos Verdes Peninsula News on Dec. 26, 2021.
To plant trees in memory, please visit the Sympathy Store.
MEMORIAL EVENTS
To offer your sympathy during this difficult time, you can now have memorial trees planted in a National Forest in memory of your loved one.
Funeral services provided by:
Osborn Funeral Home - Shreveport
MAKE A DONATION
MEMORIES & CONDOLENCES
Sponsored by Daily Breeze.
1 Entry
I wish to express my condolences to the family. You have published a beautiful obituary that tells a wonderful story about a magnificent person who accomplished a great deal during her lifetime. You should be very proud of your loved one. I found her story to be compelling and quite remarkable. My sincere condolences. Burton Professor Burton Fletcher, J.D., MBA President, Burton Fletcher Foundation for Animals, Inc. www.BurtonFletcherFoundation. org
Burton Fletcher
Other
December 26, 2021
Showing 1 - 1 of 1 results