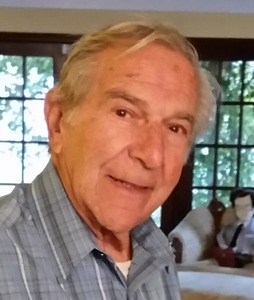 Dr. Raymond I. Wintroub, age 96, passed away peacefully in his home in Rolling Hills on November 15, 2021. Born in Omaha, Nebraska, Raymond journeyed with his family to southern California, where he graduated from Hollywood High School. Shortly after the start of World War II, he joined the Navy, and was assigned to a series of battleships, where he served as a radar specialist. A member of the "greatest generation," Raymond Wintroub saw duty in some of the hottest spots in the Pacific theatre, including Guadalcanal, Iwo Jima and multiple tours of the Philippines, surviving kamikaze attacks and harrowing battles with enemy vessels. "Sometimes I didn't think we'd make it," he recalled later. Following the war, he returned to California and married Bertha Cohen, who would be his wife of 70 years. He took the opportunity provided by the G.I. Bill to attend college at USC and to pursue a medical degree there, which he earned in 1955. He was a highly respected pediatrician in the Palos Verdes area for over four decades, during the era when doctors still made house calls. He retired from medicine after more than forty years of practice. Dr. Raymond Wintroub is survived by his four children, Frances (Mark), Rachelle (Paul), Michael (Helene) and Seth (Kris), as well as numerous grandchildren, great-grandchildren, and former patients by the thousands, who remember well the care he provided during their childhoods. Services will be private.

Published by Palos Verdes Peninsula News on Nov. 21, 2021.
To plant trees in memory, please visit the Sympathy Store.
MEMORIAL EVENTS
To offer your sympathy during this difficult time, you can now have memorial trees planted in a National Forest in memory of your loved one.
MAKE A DONATION
MEMORIES & CONDOLENCES
Sponsored by Daily Breeze.
9 Entries
Dr. Ray Wintroub was the kindest pediatrician and allergist I have ever met. He was brilliant, patient, and had a good sense of humor. Dr. Wintroub was not only very much appreciated and loved by his patients, but he also saved many lives. He was a great mentor to me, thank you, "Dr. W"!
ULRIKE ZIEGNER
Work
January 10, 2022
Our family was blessed with the best pediatrician ever in Dr. Wintroub. Although house calls were seldom made in the 1960´s, he made the time to pay a home-visit to our children on a national holiday during the 1960's. I remember in 1988, he and Bertha, and two of their children were on a USC Trojan Traveler trip to the Soviet Union when he ran out of film. We gave him a roll of our film; then after we were back home, a special delivery of a roll of film and a beautiful flower arrangement arrived at our home as a thank-you from the Wintroubs. Those are just two of the many remembrances I have of him and his wonderful wife and family over the years he treated our three children. Jan Wolverton
Jan Wolverton
December 29, 2021
I was so sorry to learn of the passing of Dr. Wintroub. I was one of his early patients starting in 1962. I was already 12 yrs old when I became a patient. I believe my mother was referred to him by Dr. Frank Goetz. Dr. Goetz was our family physician until his retirement. Although we were not in the same class, I knew Heidi Goetz (see below) at Seaside elementary school. This brings back a lot memories. Sincere condolences to the Wintroub family.
Susan Sullivan
Other
November 28, 2021
Our condolences to the Wintroub family. Dr. Wintroub treated our two children from the time of their births at San Pedro hospital until they graduated from Rolling Hills High School. One of my favorite memories was our son, age 2, had a cut on his eyebrow requiring stitches. He brought his "Pooh" for comfort. Dr. Wintroub stitched up our son's eyebrow and Pooh's eyebrow too. When it was time to take out the stitches, our son and Pooh had them removed. Dr. Wintroub became a friend to the whole family during the years we saw him and we treasured him for his care.
Deborah Power
Work
November 24, 2021
I am so sorry to hear about Dr Wintroub. He was the most kind and wonderful Pediatrician to all of my three children. My prayers are with his family.
Suzanne DeCuir
November 22, 2021
Our fondest dreams of finding a great Physician, counselor and humanist were all bound together in Dr Wintroub. Our 5 Children now ages 55 to 38 treasured him as their Doctor and we treasured him as a trusted guardian of their health and well being. Our Prayers, Thoughts go to his great family. May G-d Bless His Memory Forever.
Michael Becker Family
Other
November 22, 2021
Dr. Wintroub was a class act ...my pediatrician all my life and he was always kind and gentle ..Thank you!!
Michael Bird
Other
November 21, 2021
Heartfelt sympathy on the passing of Dr. wintroub. My 3 children loved him so much. Prayers and love to Bertha, MIRIAM EIZENWASSER
Miriam Eizenwasser
November 21, 2021
On behalf of the Goetz "kids", I would like to send our condolences to the Wintroub family. From our very beginnings, we enjoyed the benefit of Ray's kindness and expertise, as he was the pediatrician for ALL of us. More importantly, he and Bertha were part of our extended family through the extraordinary friendship our parents shared over the decades. His passing leaves us with a deep sense of nostalgia - and gratitude.
Heidi, Bobby, Jodi and Andy Goetz
Friend
November 21, 2021
Showing 1 - 9 of 9 results