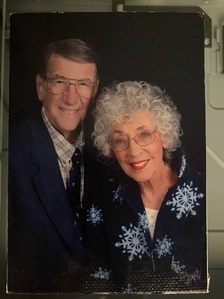 BORN
1930
DIED
2021
110/31/1930 - 06/28/2021 Shirley G Snow, daughter of Louis Christian Groshans & Elisabeth "Elise" Groshans Boquist, passed away peacefully on June 28, 2021, with her dear friend Gina at her side. She was born on 10/31/1930 in Minot, North Dakota & moved to Santa Ana, CA when she was 17. She met the "love of her life" Bert N Snow Jr. while working with his mother, June, in a department store. They were married on December 24, 1950. They moved to San Pedro, CA in 1960. This is where they raised their family & spent the duration of their lives. Shirley was preceded in death by her husband Bert N Snow Jr. and daughter Diane Snow along with her brothers & sister Lewis, Lillian, Howie, Donald, & Russell. She is survived by her loving family; son Don Snow; grandchildren Heather Tolley (Jake), Shirley Jean Daniels, Ashlyn Snow, & Maryssa Snow; her great grandchildren Jude Tolley, Jonas Tolley, & Lukas Bertram Lytle; her former daughter-in-laws Leslie & Sharon. She is also survived by many good friends. Shirley was a woman who served the Lord, her family, her church, & her community. She worked as an office administrator for First Presbyterian Church of San Pedro for 42 years. She had a special gift of listening. She knew every members name and welcomed, with open arms, anyone who walked through the church doors. She wrote an article in the monthly church newsletter, "The Fisherman", she also became the Historian of the church. She retired in 2013. In 2006 she was presented with a certificate of recognition from the City of Los Angeles for her "commitment to improving the quality of life for the residents of the City of Los Angeles" & signed by the 15th District Councilwoman, Janice Hahn. Shirley also served her church as an Elder, Deacon, Vacation Bible School teacher, an Officer & member of the Outrigger Mariners group, & in the church choir for over 30 years. Because of Shirley, her church was blessed with the receipt of a major monetary contribution made by her friend, Stillman Sawyer. Shirley was a master of the English language with an amazing wit & sense of humor. She was a talented writer where she wrote plays & acted in them for her church & the San Pedro Jr Women's Club along with the Shoreline Women's Club where she served her community for over 50 years. Shirley loved music of all kinds & would refer to songs as friends who have words written on your heart. She played piano, organ & hand bells & belonged to the musical groups; the Madrigal Singers & the Dixie Disciples. Shirley served on the Peninsula Committee Los Angeles Philharmonic & the International Chapter P.E.O. Sisterhood for 42 years. Shirley enjoyed the holidays & was known to host many memorable parties at her home. Shirley also enjoyed jogging, walking, tennis, bowling, gardening, baking cookies, & hiking where she with a friend, Janet Mathews, hiked to the top of Mt Whitney & down the Grand Canyon. A celebration of Shirley's life will be held in the fall with details forthcoming.

To plant trees in memory, please visit our Sympathy Store.
Published by Palos Verdes Peninsula News on Jul. 10, 2021.
MEMORIAL EVENTS
No memorial events are currently scheduled.
To offer your sympathy during this difficult time, you can now have memorial trees planted in a National Forest in memory of your loved one.
MAKE A DONATION
MEMORIES & CONDOLENCES
Sponsored by Daily Breeze.
2 Entries
Dear Snow Family, During my years of involvement at First Presbyterian I was always amazed by the light that shined through Shirley Snow. Shirley & Bert were wonderful persons & serving the Lord was their happiness in Life. I enjoyed knowing them and offer my most heartfelt condolences to the Snow family.
Sean P Nicolello
Friend
July 18, 2021
We were Bert and Shirley's neighbors for many years. They were great friends. We miss Shirley and pray for her and her family.
Liz and Andy Simon
Friend
July 11, 2021
Showing 1 - 2 of 2 results