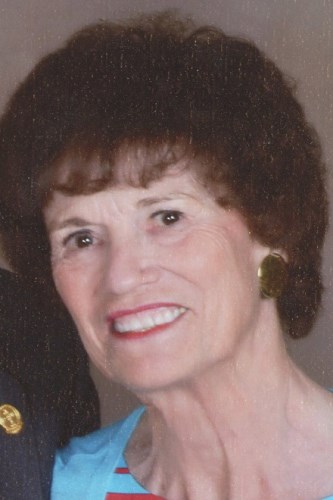 GENESEO-Mary Helen (Busch) Hughes, 80, of Geneseo, passed away at home on July 7, 2021, after a relatively short but bitter battle with cancer. A Mass of Christian Burial will be held at 10:00 a.m. on Tuesday, July 13, 2021, at St. Malachy Catholic Church, Geneseo. Reverend Dwayne Jacks will celebrate. A Recitation of the Rosary will be held on Monday, July 12, 2021, at 4:00 p.m. at Vandemore Funeral Homes & Crematory – Geneseo Chapel, with visitation following at the funeral home from 4:30 p.m. – 7:30 p.m. Memorials may be directed to St. Malachy Catholic Church, 595 E Ogden Avenue, Geneseo, IL 61254 and St. Joseph's Indian School, Chamberlain, South Dakota at https://give.stjo.org.

Mary Helen was born at Mercy Hospital in Des Moines, IA, on August 1, 1940, the daughter of Norbert A. and Virginia (Thank) Busch. She attended grade school at St John's in Des Moines and subsequently graduated from St. Joseph's Academy in Des Moines. She then attended St. Ambrose College in Davenport, IA, where she was awarded a Bachelor of Science in Nursing (BSN) in 1962. Mary Helen married Thomas Hughes in 1963, while he was a medical student at the University of Iowa in Iowa City, IA. She had two boys while in Iowa City. She had Joseph in April of 1964, and Michael in December of 1965. This family then moved to Des Moines where Thomas did his internship at Broadlawns Polk County Hospital. Thomas entered the United States Air Force in 1967 and ultimately retired in 1987. His family accompanied him to a wide variety of military installations. Mary Helen and Thomas had a daughter, Mary Therese Hughes, in August 1969 while in Baltimore, MD, while her husband attended Johns Hopkins School of Hygiene and Public Health. Subsequent assignments included bases in New Mexico, Texas, California, Florida, Colorado, Germany, Arkansas, and Illinois. The frequent relocations hindered Mary Helen from developing her own career for many years. After Thomas retired from the Air Force in 1987, she then had the opportunity to work as a psychiatric nurse but mostly was engaged in nursing education which she dearly loved. Mary Helen and her husband moved to Geneseo in 1998. She enjoyed playing bridge and played with various groups. She also belonged to several book clubs and other social clubs. She was an avid participant in the activities of St. Malachy Church and probably served in every activity available that was available for her. Mary Helen was devoted to her children and her grandchildren. She loved to travel and participated in over 30 Road Scholar programs in addition to many other tour groups visiting many foreign countries and sites in the States.

Mary Helen is survived by her husband of 58 years, Thomas. She is also survived by her two sons, Joseph (Melanie) Hughes and Michael (Shirley Reese-Hughes) Hughes, and her daughter Mary Therese (Donald) Findlay, and her seven grandchildren. She is also survived by three siblings: Francis (Mary) Busch of Arizona, Rose Ann Busch of Colorado, and Richard (Marilyn) Busch of Ohio. If you wish to leave a message of sympathy you may visit www.vandemorefuneralhome.com.