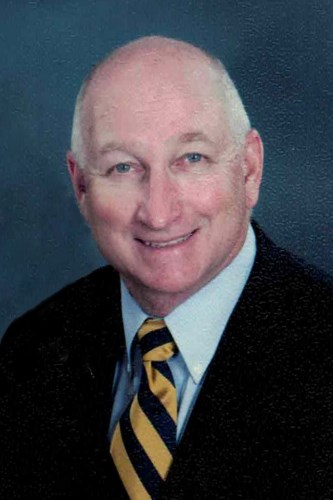 Funeral service will be 1:00 PM, Tuesday, November 23, 2021 at Holy Cross Lutheran Church, Moline. Visitation will be 3:00-6:00 PM on Monday, at Rafferty Funeral Home, 2111 1st St. A, Moline. Burial will be at National Cemetery at the Rock Island Arsenal with military honors by Vietnam Veterans of America, Chapter 299. In lieu of flowers, memorials may be made to Holy Cross Lutheran Church.

Mike was born January 5, 1947 in Monmouth, IL, the son of Wayne and Helen (Taylor) Green. He married Marcia K. Lewis on October 14, 1972 in Moline and were blessed with two children.

Mike grew up in Roseville, IL and graduated from Roseville High School in May of 1965. He was a U.S. Army Veteran, serving a year tour in Vietnam. Mike began his law-enforcement career working in the Rock Island County Jail. In 1970, Mike was sworn in as Deputy with the Rock Island County Sheriff's Department, as Lt. in charge of warrant division, Jail Administrator, and as Under Sheriff, retiring in 1990 as Sheriff. He went on to serve as the Public Safety Manager at the Quad City International Airport until 2000. Mike finished his career of public service with the U.S. Marshal's Service as Court Security Officer until he was diagnosed with Prostate Cancer from Agent Orange.

Mike was a long-time member of Holy Cross Lutheran Church, Moline, serving on the Board of Elders and member of Vietnam Veterans of America Chapter 299.

A special thanks to Home Instead and Heartland Hospice staff for their compassionate care for Mike and the family.

Condolences may be left at www.RaffertyFunerals.com.

Published by The Rock Island Dispatch Argus on Nov. 21, 2021.
To plant trees in memory, please visit the Sympathy Store.
MEMORIAL EVENTS
To offer your sympathy during this difficult time, you can now have memorial trees planted in a National Forest in memory of your loved one.
Funeral services provided by:
Rafferty Funeral Home - Moline
MAKE A DONATION
MEMORIES & CONDOLENCES
Sponsored by Rafferty Funeral Home - Moline.
2 Entries
Mike and I rode many nights together in our cruiser with the Rock Island County Sheriffs Police. We were friends, college classmates, and neighbor's. We shared a get deal of our spare time together with our wives at ball games picnics, and vacations. We got separated and lost contact as many do. I spoke with Mike just six days ago and it seemed just like yesterday we were together with our wives as couples. Nothing can bring back lost time and now I know I've lost a good man who I can call a true friend. We will all miss Mike in our own way, some more than others. I take in favorable regard the time I spent with Mike in this world knowing I will meet him again in another. May the Lord have mercy on the Soul of Mike Green and open the doorway to eternity so he can rejoice in the presence of the Lord. Stephen & Carol Bond -- Ames IA
Stephen & Carol Bond
Friend
November 20, 2021
I am so sorry for your loss. Mike was such a wonderful and kind man. Let the beautiful memories with Mike bring all of you comfort during this difficult time.
Kellie Esters
November 20, 2021
Showing 1 - 2 of 2 results