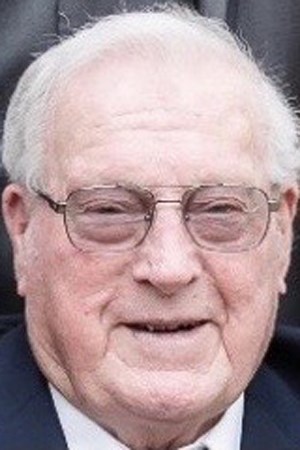 Aledo - Meredith Ray Swanson, age 91, of Aledo, Illinois died peacefully in his sleep with his wife of 64 years by his side on Monday, November 16, 2020.

Due to Covid-19 restrictions, a private service, led by his son-in-law, Steve Fulton, will be held on Saturday, November 21, 2020. Burial will be in Viola Cemetery. Memorials can be made in Ray's name to the Alexis Fire Department, Viola Fire Department or the Epilepsy Foundation. Dennison Funeral Home, Viola is assisting Ray's family with arrangements.

Ray was born on August 9, 1929 to Frank and Gertrude Carlson Swanson at the family farmhouse in rural Aledo. He was the youngest of 7 children. Except for his stint in the military, he lived his entire life in Mercer County, Illinois. He graduated from Alexis High School in 1947. He served in the United States Army from 1953 to 1955. On October 6th, 1956 he married Eleanor Jean Stabler. He was a farmer and a carpenter and always said he never worked a day in his life because he enjoyed both of those roles. There wasn't a puzzle he couldn't solve or anything he couldn't fix. He enjoyed spending time with his family, watching sports, playing golf, hunting, fishing, dancing, playing cards and wintering in Florida. Any game he could play with his wife, children, grandchildren and/or dear friends brought a twinkle to his eye. He had a calm and kind demeanor and always enjoyed a good Ole and Lena joke. He also loved attending the early Swedish Christmas morning service at the Colony Church in Bishop Hill, Illinois with 6 sleepy grandchildren in tow.

He is preceded in death by his parents, his 6 siblings, his son, Gary and his grandson, Nate Fulton.

To plant trees in memory, please visit our Sympathy Store.
Published by The Rock Island Dispatch Argus from Nov. 17 to Nov. 20, 2020.
MEMORIAL EVENTS
Nov
21
Service
Funeral services provided by:
Dennison Funeral Homes
GUEST BOOK
2 Entries
Jean and girls I am so sorry for your loss, I can hear his laugh and see his smile. I know you will deeply miss him .Bob and Ruth Fluke
Ruth Fluke
Friend
November 19, 2020
Jean and girls my deepest sympathy to you. May he rest in peace
Vi Verbout
November 18, 2020