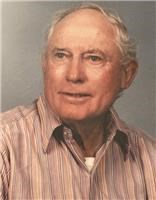 BORN
1924
DIED
2021
John Bruce Cresap was born November 25, 1924 in San Jon, New Mexico and passed away on August 9, 2021 at the age of 96.
Preceding him in death were his parents, John and Jessie Cresap; and 2 sisters, Mary E Cresap and Margaret McCalla. He is survived by his wife, June Cresap; two nephews, Michael McCalla (Carleen, Grabriella, Carson) and John McCalla; step-daughter, Sharon Julian (Mark); 3 grandchildren, Kevin Julian (Lindsay), David Julian (Amy), and Betty Jo Shaulis (Josiah); and 4 great grandchildren.
John was a long time farmer and rancher and resided on the place his father and grandfather homesteaded in 1906. He enlisted in the Army March 1945 and was honorably discharged December 1946. After returning from the military, he said he didn't want to travel anywhere else, and he stayed on the family farm the remainder of his life.
John was a member of the San Jon Baptist Church.
In lieu of flowers, the family asks that donations be made to your favorite charity.
Graveside services will be held October 30, 2021, 2:00 PM at the San Jon Cemetery.
Published by Quay County Sun from Oct. 14 to Oct. 27, 2021.
To plant trees in memory, please visit the Sympathy Store.
MEMORIAL EVENTS
Oct
30
Graveside service
2:00p.m.
San Jon Cemetery
NM
MAKE A DONATION
Please consider a donation as requested by the family.
MEMORIES & CONDOLENCES
2 Entries
Since I can remember my grandmother Peggy Stepp and mother Karen Stepp would take me out west from Arkansas on vacation. Our first night was almost always spent at either John or June's. I was always so at home in the Badlands, searching for horned toads and playing on his ranch. He used to drive us way out where my great grandfather Roy (Peggy's father) shot his initials into a rock at the bottom of what I would call a plateau. We would ride in the back of his old truck, dust flying. The last time I was there, he remembered everyone based off of how they were related to me even though I'm the youngest in our group. He truly only remembered me, I still don't know how to feel about that. Before his passing, we were pen pals, I cherish his letters even more now. I'm thankful for our last visit, we went to church with him and I got to sit by him. Before we left he gave me a hardback book that I promised I'd read. Now I believe I'll read it over and over. I was always blown away by what he could remember from his school years. I love the way that he prayed over June's food. When we would come back home to Ar I remember even at the age of 6 telling my other grandma that New Mexico felt more like home. I believe that June and John Bruce were what made it feel like that.
Melody
Family
October 21, 2021
John Bruce and I met 50 years ago when I moved to San Jon as a young 22 year old going into the motel business in San Jon. We became friends right off. Since business could be slow at times, John Bruce hired me to help on his ranch. He taught me so much and was a very dear friend. We stayed in touch every year, sending Christmas letters and once in a while a mid year letter. My wife and I got to visit with John Bruce and June back in 2005. (We met and got married after I returned to California.) This was her first time in the San Jon area.
Jay Cardillo
Friend
October 18, 2021
Showing 1 - 2 of 2 results