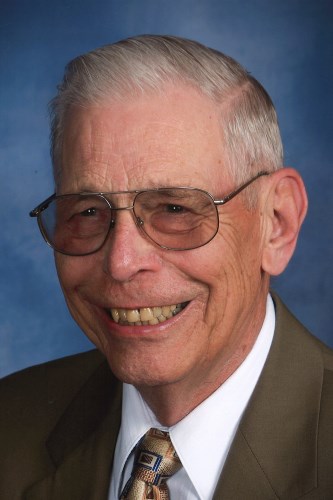 DAVENPORT-Arthur E. "Art" Petersen of Davenport passed away Sunday, April 25, 2021 at Genesis Medical Center, East Rusholme, Davenport. Funeral Services will be private but may be viewed via livestream at 10:00 a.m. Friday, April 30, 2021 by visiting Art's obituary at www.hmdfuneralhome.com. A link will appear 10 minutes prior to service time. There will be a public visitation on Thursday, April 29, 2021 from 4-6pm at Halligan-McCabe-DeVries Funeral Home. Pandemic protocols must be followed. Burial will be in Davenport Memorial Park where Military Honors will be presented by Davenport American Legion Post 26.

Memorials may be made to the Ridgecrest Foundation, Newcomb Presbyterian Church or Honor Flight of the Quad Cities.

Art was born in the rural Scott County farm home of Edward J. and Rose L. Petersen in 1928. He married Mary Ellen Hankins on June 20. 1948. She preceded him in death in January 2007, having shared almost 60 years of marriage.

Art attended Blue Grass Township #8 school where he had the same teacher for 8 years. To attend 9th grade at Frank L. Smart School, he rode his bicycle for 3 ½ miles each way on mostly gravel roads. He served in the U.S. Army for two years during the Korean conflict, being honorably discharged as a Staff Sergeant. Art subsequently attended AIC business school where he earned an Associate Degree in Accounting and later was an instructor at AIC. He was employed at Model Dairy, Nichols Homeshield and for 35 years at Alter Trading Corporation, retiring as Secretary-Treasurer but continued for many years as Administrator of the company 401(K) Plan.

Art was a member of Newcomb Presbyterian Church, having served as Treasurer, Elder and Deacon. He was a 60-year member of Davenport American Legion Post 26 having served as Commander, Finance Officer and Chair of the Building Board for many years. He served as Treasurer of the Ridgecrest Village Foundation and the Ridgecrest Residents Council. He was an organizing member and Treasurer of Honor Flight of the Quad Cities since 2008.

Art enjoyed playing golf with his buddies and during his playing days, recorded two holes-in-one and two eagles. He always remarked that it was more fun to be lucky than good. In recognition of his love for the game, he volunteered as a Marshal at the John Deere Classic for 20 years.

With a passion for service to fellow veterans, Art volunteered over 1,000 hours each year to the success of Honor Flight of the Quad Cities.

Art was a loving and kind Christian, always willing to help a friend in need. He loved spending time and traveling with his children. He particularly enjoyed his granddaughter Kelly with whom he spent valuable nurturing time as she lived nearby.

In addition to his wife, he was preceded in death by his parents, brothers Edwin (Edna) Petersen, Walter (Velma) Petersen and Alvin (Garnetta) Petersen.

Online condolences may be expressed to Art's family by visiting his obituary at www.hmdfuneralhome.com.

To plant trees in memory, please visit our Sympathy Store.
Published by Quad-City Times on Apr. 28, 2021.
MEMORIAL EVENTS
Apr
29
Visitation
4:00p.m. - 6:00p.m.
Halligan-McCabe-DeVries Funeral Home
614 Main Street, Davenport, IA 52803
Apr
30
Funeral service
10:00a.m.
via livestream at www.hmdfuneralhome.com
Funeral services provided by:
Halligan-McCabe-DeVries Funeral Home
MAKE A DONATION
MEMORIES & CONDOLENCES
Sponsored by Halligan-McCabe-DeVries Funeral Home.
3 Entries
May Art rest in peace. He was truly a wonderful man, with a smile and kind word for everyone. Prayers to the family, I am sorry for your loss.
Sheila Dreher
April 30, 2021
So sorry to hear that Art passed away. We got to know Art through Newcomb Church and the "Friends" luncheon group as well as the Golden Age group. He was always so upbeat and told many funny jokes as well! I have talked to him several times on the phone lately. He was a wonderful man. we will surely miss him.
Liz and Ron McCalla
April 28, 2021
So sorry to hear of Art's passing. He was a wonderful man and a devoted Christian. He was a very faithful member of Newcomb and he had many good friends here. He will certainly be missed.
Newcomb Presbyterian Church
April 28, 2021