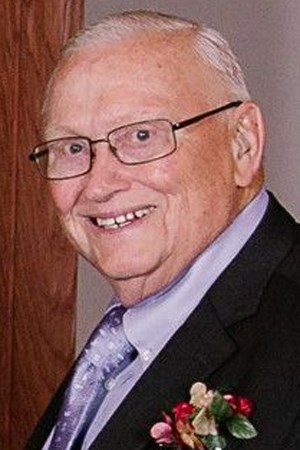 Charles Norman Wuestenberg, 80, of Durant, passed away Wednesday, November 18, 2020, at Good Samaritan Nursing Home, Davenport. A celebration of life will be held at a later date. Private burial will take place in Durant Cemetery. Memorials may be given to Gloria Dei Lutheran Church Endowment Fund, Tri-County Heritage Museum or Camp Courageous. Condolences may be left at www.bentleyfuneralhome.com.

Charlie was born in Davenport, Iowa on March 25, 1940, to Norman and Marian (Frick) Wuestenberg. He graduated from Durant with the Class of 1958. Charlie proudly served in the United States Marine Corp. He married Delores Riessen on August 26, 1961. Charlie later married Barbara (Lilienthal) Frey on December 24, 1989 in Gloria Dei Lutheran Church, Durant.

Charlie worked for the Stockton Coop for 28 years and later for Harvest States Coop for 12 years. He was a member of Gloria Dei Lutheran Church, Durant Athletic Boosters, Jaycees, American Legion Post# 430 and the Tri-County Historical Museum. Charlie loved the outdoors, especially playing golf, fishing and gardening. He also enjoyed cooking, dancing, traveling, woodworking, painting and crafting custom picture frames. Charlie had a passion for old time music and served on the Durant Polka Fest Committee for many years. He was also a veteran jigsaw puzzler and card player, especially Pinochle and Sheephead (Schafkopf).

Charlie was preceded in death by his parents; brother, Richard Wuestenberg; his in-laws, Alvin and Dorothy Lilienthal; and brother-in-law, Charlie Lilienthal.

To plant trees in memory, please visit our Sympathy Store.
Published by Quad-City Times on Nov. 20, 2020.
MEMORIAL EVENTS
No memorial events are currently scheduled.
To offer your sympathy during this difficult time, you can now have memorial trees planted in a National Forest in memory of your loved one.
Funeral services provided by:
Bentley Funeral Home - Wilton - Wilton
GUEST BOOK
39 Entries
I'm so sorry to hear about the loss of Charlie. He was a great guy and I always enjoyed visiting with you both at Polka Fest in Humboldt. Charlie always had a smile on his face that could brighten the day. What a great video tribute to him. I can see from the video that family meant a lot to him. May God surround you all and give you the peace and comfort that can only come from Him.
Carolyn Hartmann
November 24, 2020
I'm so sorry to hear of Charlie's passing. When he attended classes at Heinsite Fitness, I joked with the other guys at class that Charlie was my favorite because he was nice and he listened to me! He truly was a kind man❤ Kay Hein
Kay Hein
Friend
November 23, 2020
Barb and Family -- We are so sorry for your heartbreaking loss. May the love of those around you lift you up and hold you close during this time.
Justine Rogers
November 23, 2020
Barb I'm so sorry to hear about Charlie. He was wonderful to work with. I will miss his hugs whenever I would run into him. Mary
Mary Moore
Coworker
November 23, 2020
Barb: I am so sorry to see that Charlie has been called to be in a better place. I know you will feel lost but time will make things better - especially with all the good memories he has left with you. I never had a chance to get to know Charlie but, from what I've learned about him, he was a very special person & will be missed by all who knew him. Sending my heartfelt sympathy to you & your family, Shirley Sterner.
Shirley Sterner
November 22, 2020
Im going to miss our talks and your knowledge you were always willing to share. It was an honor to meet you
Kat
November 22, 2020
Barb, and family sorry for your loss of Charlie we was a great guy and he'll be watching down on all of you.