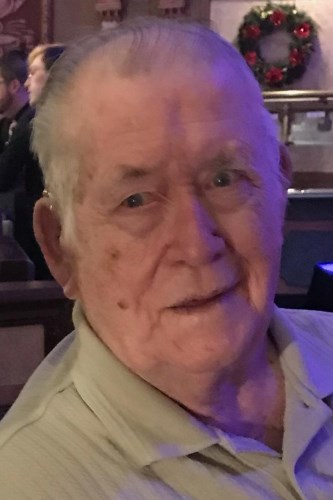 Earl E. Gullion, 94, of Davenport, IA, passed away peacefully in the comfort of his home on Friday, November 26, 2021, after enjoying Thanksgiving Day with family. Visitation will be held 12:00-2:00 p.m. on Wednesday, December 1, funeral service immediately following at the Runge Mortuary. He will be laid to rest in Davenport Memorial Park. Memorials in his honor may be made to the American Legion Post #26 or Gilda's Club of the Quad Cities. Online condolences may be expressed at www.rungemortuary.com.

Earl was born August 4, 1927, the son of Cleo and Marvel (Lee) Gullion in Hamilton, IA. He served proudly in the U.S. Army during the Korean Conflict, earning the Bronze Star. Earl was united in marriage to Evelyn A. Peters in March of 1975. He retired from Ralston Purina after 47 years.

Earl was an easy-going man with a dry sense of humor, who enjoyed teasing and joking with people. He was an avid fan of the Chicago Cubs and Iowa Hawkeyes. He also enjoyed traveling with Evelyn, fishing, and was a member of several bowling leagues.

He was preceded in death by his parents; his first wife, Frances; infant daughter, Carol; sister, Lois; and brothers, Ed and Norman.