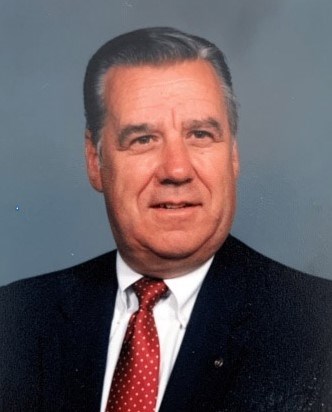 Services will be Saturday, October 17th at 10 am, at Calvary Church Quad Cities, Moline, IL, with visitation on Friday, October 16th from 3 pm until 7 pm at Wendt Funeral Home, Moline, IL. Burial will be at Rose Lawn Cemetery, Moline, IL.

Memorials may be made to American Cancer Society

Earl "Buck" served as Moline Alderman 2nd Ward from 1971-1973 and then was elected and served as Mayor of Moline from 1973 - 1977. He was a member of First Congregational Church in Moline, designated Head Usher for many years; the Masonic Lodge 1014 AF&AM - 32nd Degree Mason - "High 12", Scottish Rite Valley of Moline, past President of the Moline Lions Club, the Rotary Club, S.A.R. (Sons of American Revolution), past President of Rock Island County Historical Society, past President of the Mississippi Valley Region Antique Automobile Club of America, Eastern Star, Kaaba Shrine, and "Over the Hill" Coffee Group.

His enjoyments included collecting antiques, working on his vintage cars and traveling around the world and spending the winters at their home in Sarasota, Florida. "Buck" will be remembered for living life to the fullest, with compassion, integrity and humor. He was friendly and approachable to anyone and everyone and was an extraordinary person to all that knew him.

He was preceded in death by his parents, and brothers, William Wendt and Michael Wendt.

Online condolences may be sent at www.wendtfuneralhome.com

To plant trees in memory, please visit our Sympathy Store.
Published by Quad-City Times on Oct. 14, 2020.
MEMORIAL EVENTS
Oct
16
Visitation
3:00p.m. - 7:00p.m.
Wendt Funeral Home - Moline
1811 15th Street Place, Moline, IL 61265
Oct
17
Service
10:00a.m.
Calvary Church Quad Cities
, Moline, Illinois
Funeral services provided by:
Wendt Funeral Home - Moline
GUEST BOOK
6 Entries
To all the Wendt's, condolences on Buck's passing. Buck was always a character in the best of all possible ways, and I know he will be missed by many.
Larry Case
October 17, 2020
I have fond memories of all of the Wendt family from our time in Moline (1940's) Earl Sr. Helen and her children, Buck, Bill and Mike. Visits in the summertime were the highlight of my childhood. Rest in peace Buck. John Vander Vennet
John George Vander Vennet
October 15, 2020
Deeply sadden for our loss. Buck will be remembered for his many great accomplishments and how he welcomed everyone. Sending sympathy and prayers at this sad time. =O<9=O
Andrea Siefker
October 15, 2020
Linda and I extend our deepest sympathy. May his memory be eternal
George Kutsunis
October 14, 2020
My deepest sympathies for your loss, Beth and Boo. I cherish the memories of Buck and the many examples of kindness and generosity he frequently displayed. I also cherish the memories of our childhood together with you two. Know I am thinking of you and wish you both the comfort that only God can provide at a time such as this. Kent
Kent Wolfe
October 14, 2020
Buck was an incredible man. He was a wonderful family friend who will be dearly missed. His smile would warm up a room. His laugh and great sense of humor got many people through difficult times in their life. Please say hello to my father. I know you have a lot to catch up on. You taught us how to remember to live life to the fullest. Love and hugs to Coralie and the entire family.
Janice and Anthony Drain
October 14, 2020