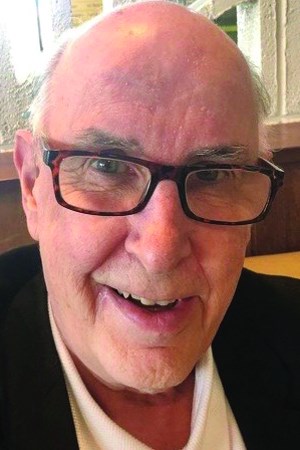 Davenport- Funeral services and Mass of Christian Burial for Edward J. Von Feldt, 74, of Davenport, will be 11:00 a.m. Saturday, October 3, 2020 at Sacred Heart Cathedral, Davenport. The Mass can be livestreamed by visiting Sacred Heart's website at https://www.shcdavenport.org/. Visitation will be held from 4 until 7 p.m. Friday at the Halligan-McCabe-DeVries Funeral Home, Davenport. There will be additional visitation at church on Saturday from 10 a.m. until the time of the Mass. Please know everyone is welcome, but please, masks are required and social distancing will be adhered to.

Ed died Thursday, September 24, 2020 at the University of Iowa Hospital following a courageous battle with interstitial lung disease (pulmonary fibrosis). Ed was surrounded by his family at the time of his passing.

Ed was born on March 5, 1946 in Austin, Minnesota, a son of Edgar and Esther (Frandel) Von Feldt. He met the love of his life, Jeanne M. O'Brien at a freshman dance at St. Ambrose University. Once they met, Ed and Jeanne were inseparable and became best friends. They were united in marriage August 10, 1968 at St. Mary's Catholic Church, Iowa City. Together, they raised two children, Katie and Patrick in their loving home in Plover, Wisconsin where treasured family memories were created. This August they celebrated 52 years of marriage together.

Ed had master's degrees in Anthropology and School Administration. He began his illustrious educational career as a teacher in the Milwaukee Public Schools before taking the principal position at Stevens Point Area Senior High School (SPASH). Ed retired in 2003 after 25 years in administration. During his time at SPASH the school was the recipient of Excellence in Education from the U.S. Department of Education and was honored by the 40th president, Ronald Reagan, at the White House in 1985. He took pride in bringing a sense of community to the school and during the national evaluation SPASH was the only school sited where the students were given an active role in running the school. He was driven by doing all he could for the welfare of the students. He was a member of the Association of Wisconsin Administrators. Following his retirement, Ed was very proud to write many successful grants for All Saints Catholic School where his wife, Jeanne, is principal.

Ed's greatest passion was his family, and he loved spending time with his wife, children and his four granddaughters-Rori, Blake, Vivian and Kamryn. He had a passion for history and loved reading every book he could find that would teach him something new about the past and great leaders, from Civil War Generals to Winston Churchill. Ed loved being outdoors and enjoyed fishing. He also enjoyed many sports, but had a true passion for basketball as he played in college for St. Ambrose University where he excelled. Ed passed this love for this sport to both his daughter and son. Ed had a gift for storytelling and loved to share his quick wit and knowledge with all whom he met.

In lieu of flowers, memorials may be made to All Saints Catholic School or Stevens Point Area Senior High School.

He was preceded in death by his parents, sisters, Marian Von Feldt and Elaine Berge, and his grand dog in Heaven, Madison.

The family would like to thank the love and care shown by the incredible doctors and nurses of the University of Iowa hospital RSCU unit.

To plant trees in memory, please visit our Sympathy Store.
Published by Quad-City Times from Sep. 27 to Sep. 29, 2020.
MEMORIAL EVENTS
Oct
2
Visitation
4:00p.m. - 7:00p.m.
Halligan-McCabe-DeVries Funeral Home
614 Main Street, Davenport, IA 52803
Oct
3
Visitation
10:00a.m. - 11:00a.m.
Sacred Heart Cathedral
, Davenport, Iowa
Oct
3
Funeral Mass
11:00a.m.
Sacred Heart Cathedral
, Davenport, Iowa
Oct
3
Funeral Mass
11:00a.m.
livestreamed by visiting Sacred Heart's website at https://www.shcdavenport.org/
Funeral services provided by:
Halligan-McCabe-DeVries Funeral Home
GUEST BOOK
8 Entries
My sincere condolences to the loss of Edward. Edward was one of those common sense administrators that actually seen the need for the future of education. I had the opportunity to correspond with Edward when I was appointed to the boundary study committee and the maintenance and facilities committee in 1989-91by former School Superintendent Dwight Stevens. Edward demonstrated the need for the improvements to transpire so that the committees could present to the board fiscally responsible options. Alot of great memories! I've heard nothing but great things about Edward from former students and teachers at Stevens Point Area Senior High School (SPASH). May God rest his soul. I will remember him in my prayers. Phillip J Janowski, Town of Hull (Stevens Point), WI.
Phillip J Janowski
October 6, 2020
I will always remember the day that Mr. VonFeldt came to the hospital to visit me in May of 1982. I was in a car accident four days before graduation and had to miss the ceremony. He was such a caring person and great principal. He personally delivered my diploma to the hospital room, shaking my hand for a picture as he presented it to me. Thank you, Mr. VonFeldt.
Kelly Barsness Puerling
Student
September 30, 2020
May God bless you and your family in this time of sorrow. So sad to hear of your passing!!
Cynthia Rochin
Student
September 28, 2020 Mr. Von Feldt, the coolest of cool. Always greeted students with a large smile, into his office. even if the circumstances weren’t favourable for said student.
Fondest memory: Senior Prom pictures at Von Feldt’s with my boyfriend, Jeffery “Westo” West.
RIP Westo and Mr. V. The coolest of cool dudes!
Nadine &#8220;Nader&#8221; Barten
Student
September 27, 2020
It was an honor to work with Ed as a fellow administrator for the Stevens Point School District. Great leader and a wonderful family. So sorry for your loss. Kass and I have you all in our thoughts and prayers.
September 27, 2020
In loving memory of a wonderful person. We will love you and miss you always.Ed, Mike O’Malley, and myself lived together while at St. Ambrose. It was a laugh a minute and the best time of my life. Also I had the honor and privilege of playing basketball with Ed on the St. Ambrose varsity team. He will always be remembered as a stand up friend who touched the souls of everyone!
Dennis Smith
Classmate
September 27, 2020
Ed, we hadn't spoken in years, but you are still a life-long friend - I'll hold up my end of the bargain for the duration. Rest In Peace. Was hoping to see you at a St. Ambrose reunion but it didn't happen. Fond memories of our friendship at the Mc Cords on 17th Street in Davenport. Condolences to Jeannie and the children and grandchildren.
Michael O'Malley
Friend
September 27, 2020
Ed was a great cousin , classmate and teammate. My deepest condolences to Jeannie
Chuck Von Feldt
Family
September 26, 2020