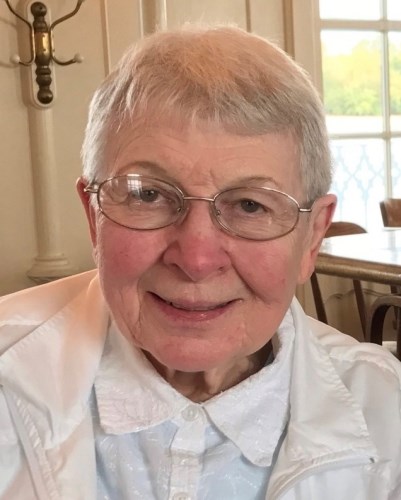 Eileen JoAnn was born February 5, 1933 in Riverside, Iowa to William and Kathryn (née Frank) O'Conner. She was #6 of 7 children. She graduated from St. Mary's High School in 1951. Even when girls from the farm didn't always go to college, JoAnn set her own path and went out of state to Detroit and earned her Bachelor's Degree in Psychology from Marygrove College and a Masters in Social Work from Wayne State University.

JoAnn met the love of her life Raymond Joseph Laures, in Hills, Iowa, and they were united in marriage on Sept 1, 1956. JoAnn & Ray raised 6 children. JoAnn was a loving mother. Spending time with and around her children, grandchildren and great grandchildren was the most important part of her life with Ray. Though JoAnn was short in stature, her strength, determination, and kindness made her a towering presence for her family and friends. Her independent yet caring nature were assets in 45+ years of serving others professionally and personally. She lived her faith and was very involved with the church, prayer group and served as a Eucharistic minister.

he was an avid gardener and conversationalist, she also would never miss a birthday, an opportunity for a game of scrabble, or doing a "grandma job." Her friendly and calm demeanor put others at ease and made her a joy to be around. It is with broken hearts that we must now hold her spiritually rather than physically, but it is for her and because of her that we will move forward with faith, hope, and love.

A Private Family Service will be held with The Rev. Fr. Stephen Page officiating. Burial will follow at St. Joseph Catholic Cemetery in DeWitt. A celebration of life memorial service will be announced at a later date.

Condolences may be expressed and a photo tribute viewed at www.schultzfuneralhomes.com.