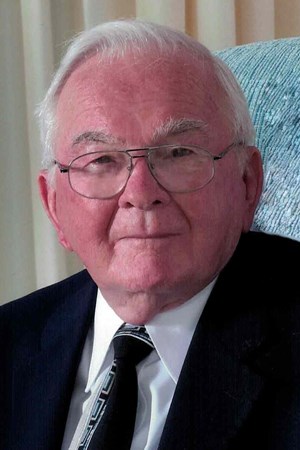 MOLINE-Glenn L. Medhus, 93, of Moline, passed away Monday, July 19, 2021 at the University of Iowa Hospital in Iowa City.

A Mass of Christian Burial will be 12:30 pm Friday, July 23, 2021 at Christ the King Church, Moline. Visitation will be 4-7pm, Thursday at Rafferty Funeral Home, 2111-1st St A, Moline with a rosary recited at 3:30pm. Entombment will be at St. Mary's Cemetery, East Moline with military honors conducted by American Legion Post 246, Moline. In lieu of flowers and statuary, memorials may be made to the Glenn L. Medhus Scholarship at University of Iowa Tippie College of Business, Moline Rotary, Junior Achievement or United Way.

Glenn was a U.S. Air Force Veteran having served during the Korean War. He worked at Deere and Co. for 37 years retiring in 1987 as Director of Corporate Planning, Farm Equipment and Consumer Products. Serving on the board of Firstar, he was elected Chairmen, overseeing its merger with US Bank.

Glenn was a founding member and first trustee of Christ the King Church, Moline. He served many leadership roles in the Quad-City community: director and trustee of Junior Achievement, president of the Moline Rotary Club, former chairman of Franciscan Hospital board of trustees, long-time board member of the Unity Point Foundation, director of United Way and of the Boy Scouts.

Additionally, he was a member of the University of Iowa Presidents Club, a 50-year member of Tri City Deere Investment Club, on the Advisory Board for Western Illinois University, served on the Festival of Trees Steering Committee and enjoyed golfing at Short Hill Country Club.

Glenn loved people. He valued friendships, education and life-long learning, loved to travel and was an avid Iowa Hawkeyes fan, proudly following the football team to 15 Bowl games during the 50 years he held season tickets. He loved his family and enthusiastically cheered on his grandchildren in their academic and athletic pursuits.

Condolences may be left and video viewed at www.RaffertyFunerals.com.