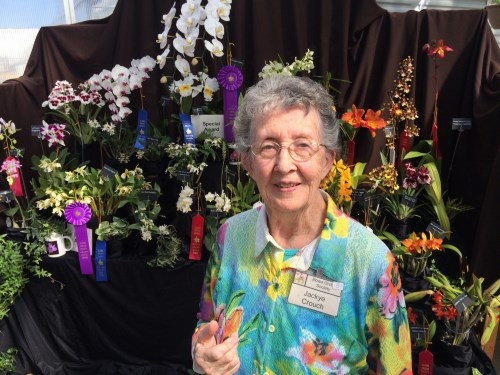 A Celebration of Life Service will be held at the Unitarian Universalist Congregation of the Quad Cities when we can all gather safely. In lieu of flowers, please honor Jackye's memory by donating to the Quad City Animal Welfare Center. https://qcawc.org

Jackye was born in Elmhurst, Illinois, daughter of Herbert and Glenna (Mode) Ball on March 24 1930. She graduated from Blackburn College with a degree in English and Art. In 1953, she married Norman Crouch in Alton IL. They were active in the lives of their three children and enjoyed 60 years together..

Jackye began her teaching career in Pensacola, Florida, while Norm was serving in the Navy. She continued teaching in Wood River, IL prior to moving to Bettendorf in 1959. Jackye quickly realized she needed something to positively channel the energy of her children. She learned how to coach them, and eventually the neighborhood children in gymnastics.

She was key in developing the sport of Gymnastics in the Quad City area, eventually being the cofounder of Gymnastic Spectrum.

In her 90 years of life, she had many passions. As a teenager, she was known for her love of horses. Years of riding and training and eventually a camp counselor- teaching the campers to square dance on horseback!

Growing up in the Crouch house meant growing up with a dog. They were always a beloved part of the family.

Jackye's love of animals included birds (some of which were rescued). Her special friends included a parrotlet, Merlin and a Meyer's Parrot, Jewel.

Her green thumb served her well from outdoor gardening (hostas, irises, peonies, daylilies) and eventually a 2 story greenhouse for her award winning orchids

She loved Christmas and was famous for her homemade shortbread! YUM!!

Jackye took charge of her passions. In addition to gymnastics, she served as president of the Illowa Orchid Society and the Quad City Parrot Society.

Preceded in death by her parents Herb and Glenna Ball and her husband Norman.

The family would like to extend a special thanks to the Genesis Hospice, particularly her nurse, Maggie.

To plant trees in memory, please visit our Sympathy Store.
Published by Quad-City Times on Jan. 10, 2021.
MEMORIAL EVENTS
No memorial events are currently scheduled.
To offer your sympathy during this difficult time, you can now have memorial trees planted in a National Forest in memory of your loved one.
Funeral services provided by:
Cremation Society of the Quad Cities
GUEST BOOK
3 Entries
Caryn and family, We are thinking of you on your journey after the death of Jackye. Reading of her life initiatives was invigoration. Your family, Friends and her communities were certain to have been enriched by Jackye´s efforts in parson of living authentically. We were honored when Caryn and Jackie chose to join the Davenport Unitarian Meeting House. We hope to meet you in person in the future, to hear more about Merlin and Jewel! Respectfully, Darcy J. Anderson Steen F. Burke
Darcy Anderson & Steven Burke
January 20, 2021
My thoughts, prayers and sympathy to Jackye's family. She was a sweet and kind lady. I got to know her and Norman through Friendship Force and enjoyed times we spent together.
Verla Wulf
January 11, 2021
Terry, I am sorry to hear about your Mom. I know she taught a lot of kids gymnastics but I remember in gym class they had me try something then had you do it right. I laugh every time I think of that. We had a balance beam and a mat in the basement when Debbie was taking classes. She was a nice lady.
Denny Cox
January 10, 2021