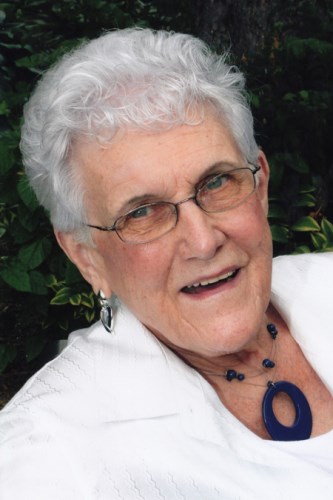 Jayne Winifred Schroeder, 91, passed away peacefully on Thursday, October 7 2021, at Davenport Good Samaritan Home. Funeral services will be held on Saturday, October 16, 2021 at 10:30am at Weerts Funeral Home; visitation will be from 9am until time of service. Following the service burial will be at Davenport Memorial Park Cemetery. Memorials in Jayne's name may be made to St. Paul Lutheran Church or to the Good Samaritan Society.

Jayne was born February 16, 1930 in St. Louis, Missouri to George Washington Egermayer and Helen Winifred (Jeude) Egermayer. She moved from St. Louis, MO to Rock Island, IL and graduated from Rock Island High School around 1947. She met her husband, Warren "Whitey" Julius Schroeder at the Prom roller rink and they were married on April 9, 1949 at First Presbyterian Church. Warren was the love of her life and they had two children, David Warren Schroeder and Paul Brian Schroeder, residing in Davenport, IA. Warren preceded her death on December 4, 1980.

Jayne worked at the Rock Island Arsenal and retired in 1990. Jayne was in regular attendance at St. Paul Lutheran Church. She was an avid Cubs fan and enjoyed discussing the games with her family. She enjoyed playing euchre with her circle of card buddies for many years. She took great care in dressing fashionably no matter what the occasion. Jayne was a proud grandmother to her grandchildren and great grandchildren, speaking of them to anyone she met over the years.

Fond memories and expressions of sympathy may be left to the family by visiting her obituary at www.weertsfh.com.

Published by Quad-City Times on Oct. 13, 2021.
To plant trees in memory, please visit the Sympathy Store.
MEMORIAL EVENTS
Oct
16
Visitation
9:00a.m. - 10:30a.m.
Weerts Funeral Home
3625 Jersey Ridge Rd, Davenport, IA
Oct
16
Funeral service
10:30a.m.
Weerts Funeral Home
3625 Jersey Ridge Rd, Davenport, IA
Funeral services provided by:
Weerts Funeral Home
MAKE A DONATION
MEMORIES & CONDOLENCES
Sponsored by Weerts Funeral Home.
1 Entry
David, Paul and family: I've thought of you all along with my wonderful memories of Jayne so often. She was always part of the family for us kids and I can't begin to share all the times she made us laugh and feel loved. Whether it was at our house on Lombard or your house on Division, time spent with Jayne, Warren and you boys was a huge part of a happy childhood. I'm so sorry for your loss, and it is very much shared. Dave and I are so glad to have visited her last spring, along with Mom. I know she was depressed, but sparks of the old Jayne still came through. Mom cried so hard after we left, knowing it was the last time she'd see her dearest, oldest friend. May memories comfort you; they are a treasure to us. Love, Deb and Dave
Deborah Prust Adams
October 13, 2021
Showing 1 - 1 of 1 results