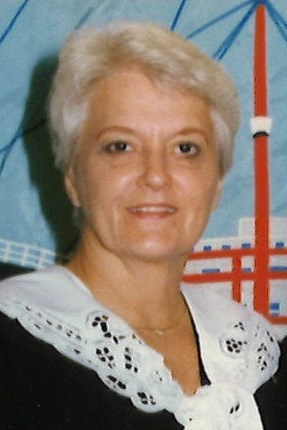 Joan was an extraordinary and curious woman. She was born March 26, 1930, in Lemont, Illinois, one of five children in the family of Casmira and Benjamin Markiewicz. She grew up in Lemont and was valedictorian of her high school class. She attended Northern Illinois University and served as president of her sorority. Joan married Richard Giudici in 1950 and the newlyweds moved to the small town of Leland, Illinois where they experienced rural life and Joan had to explain to her toddler daughter, Mary, that her favorite chicken must have wandered off when they were actually eating it for dinner. The family then moved to Davenport in 1953 and Joan began her long teaching career at Cody School in rural LeClaire. While raising six "active" children and perfecting her spaghetti and beans recipe, she was an elementary math and social studies teacher at Cody, Our Lady of Lourdes Catholic School in Bettendorf, and Wilson, McKinley, and Eisenhower Schools in Davenport. Joan completed her teaching degree at Marycrest College where, as a class project, she developed Davenport's first Meals-on-Wheels program. She enlisted her children as delivery volunteers, who in turn learned to appreciate the value of community service. Upon retirement from teaching, Joan tutored local inmates toward their GEDs and volunteered at the Holy Trinity Mission School (former St. Joseph's), Genesis Medical Center, the Adler Theatre, and the Butterworth Center. She also led tours at the Rock Island Arsenal and was a Friend of the Davenport Public Library. Joan's curiosity about the world sparked her interest in travel. She embarked on many trips abroad with her friend and fellow teacher Bess Wellner participating in teacher exchanges and as a member of Friendship Force, where she also hosted visitors from abroad. Joan's love of learning was lifelong. She enjoyed the Quad City Symphony, visits to the Figge Art Museum and the River Action Channel Cat Talks.

Anyone who was lucky enough to know Joan, knows she was witty, enjoyed humor and had great stories to tell.

Joan was happiest when she was with her family, sharing a meal or a conversation at her round kitchen table, taking drives in the Iowa countryside with her dog on her lap, reading stories to her grand-children and great-grandchildren, teaching children in a classroom and laughing with her best friend Jodie Nelson.

Joan was preceded in death by her brother, Edward, and two sisters, Lucille and Donna.

To plant trees in memory, please visit our Sympathy Store.
Published by Quad-City Times on Jul. 13, 2021.
MEMORIAL EVENTS
Jul
14
Visitation
5:00p.m. - 7:00p.m.
Halligan-McCabe-DeVries Funeral Home
614 Main Street, Davenport, IA
Jul
15
Funeral Mass
St. Alphonsus Catholic Church
, Davenport, IA
Funeral services provided by:
Halligan-McCabe-DeVries Funeral Home
MAKE A DONATION
MEMORIES & CONDOLENCES
Sponsored by Halligan-McCabe-DeVries Funeral Home.
4 Entries
So sorry for your loss. She was a wonderful person
Kathleen Jones
Friend
July 14, 2021
Dear Mike, Rick and family, Though my words can do little, I hope my thoughts and prayers will support you all at this time. Sheryl
Sheryl Cowherd Turner
School
July 13, 2021
Sorry to hear of the passing of one of my favorite teachers at Wilson Elementary in Davenport. I was a student there in the late 60s through early 70s and she helped me accelerate on a couple of subjects. My condolences to the family. Jon Small
Jon Small
July 13, 2021
Condolences to the Giudici family. Joan was a wonderful woman. May she rest on peace.
Cheryl Traum
July 12, 2021
Showing 1 - 4 of 4 results