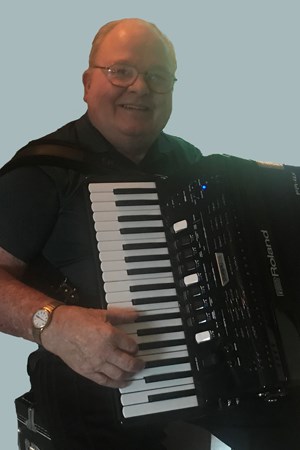 A memorial service will be held at 12:00 p.m. on Saturday at McGinnis-Chambers Funeral Home, Bettendorf. Visitation will be from 10:00 a.m. until time of service at the funeral home. Those attending are asked to wear a mask and observe social distancing. Memorial may be directed to Pregnancy Resources of the Quad Cities or to Quad City Arts.

John was born October 18, 1942 in Davenport, to John and Rachel (Claeys) Retzl. He graduated Bettendorf High School in 1960. In September of 1964 he married Karen Sue McFate, and later married Kay Anderson on October 26, 1990. In his earlier years, John co-owned and operated a Standard station in Moline. Prior to retirement in 2004, he worked for Davenport School District as a bus driver and mechanic for over 30 years.

John was an accomplished accordion player, having played in numerous local venues. He loved spending time with his family, especially going to the casinos with his brothers. He also loved to travel with Kay in their convertible. John will be remembered as a devoted husband, father, grandfather, and brother.

In addition to his parents, he was preceded in death by his brother, Denny Retzl.

Online condolences may be shared with John's family at www.McGinnis-Chambers.com.

To plant trees in memory, please visit our Sympathy Store.
Published by Quad-City Times on Jan. 7, 2021.
MEMORIAL EVENTS
Jan
9
Visitation
10:00a.m. - 12:00p.m.
McGinnis-Chambers Funeral Home
644 River Dr, Bettendorf, IA 52722
Jan
9
Memorial service
12:00p.m.
McGinnis-Chambers Funeral Home
644 River Dr, Bettendorf, IA 52722
Funeral services provided by:
McGinnis-Chambers Funeral Home
GUEST BOOK
9 Entries
It´s taken me quite a while to be able express my sympathy to the family, this news really shook me. I have so many fond memories of John from the bus lot days to square dancing to going and listening to him play. His nicknames from bus lot days, Pretzilla, Beachball, Pinstripes and my favorite... friend. God bless those he left behind. Kay & kids my heart aches for you!
Mike & Connie Williams
January 15, 2021
I loved John's smile & laugh; he and Kay's music; and his great Elvis impersonations. He would talk about more chances to share their music, rather than cutting back. I will miss him.
Keith Wood
January 9, 2021
I'm so sorry for the loss of John. He was a very talented musician but also had a huge personality and a smile that lit up a room
Shirley Forari
January 9, 2021
I am so very sorry to hear your loss Kay. You both enjoyed traveling and singing. I send you my condolences.
Jolene Freeman
January 8, 2021
Oh Kay, I am so sorry to hear this news. I loved when he visited the building I worked at to sing and have great memories if you guys playing for Grandma Violet's birthday party years ago.My thoughts are with you and your entire family. Godspeed.
Cheli Larson
January 7, 2021
John was a lifelong friend of mine. We shared great times together. A good Christian a loyal friend and fun to be with. Sure will miss him but know he is a better place.
Larry Carlin
January 7, 2021
We will miss having you and John providing music for us on many different occations. We saw you as fellow ministers. You have always amazed us and God gave you many opportunities to use your talents for Him. John you will be greatly missed.
Karl and Sharon Roberts
January 7, 2021
One of my best buddies in High School and then became a great Christian brother. We enjoyed many good times. You were a good man. So sorry Kay...
Don Paustian
January 7, 2021
I so remember you two playing and singing at the nursing homes i volunteered and worked at. John was a man of character.A man of God
Pattie Flesch
January 7, 2021