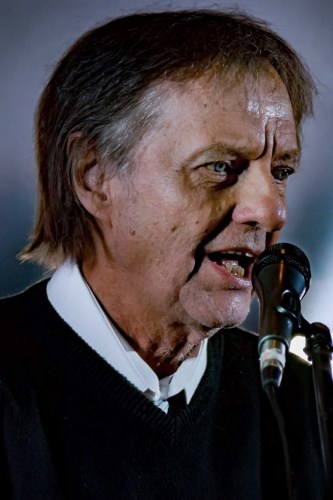 DAVENPORT-Joseph Michael "Mike" Stroehle, 75, of Davenport, Iowa died Sunday, December 27th after a fall at his home. Private services will take place at St. Paul the Apostle Catholic Church. There will also be a celebration of life and music for all of his family, friends and fans at a later date to be announced. Memorials may be made to the family. Halligan-McCabe-Devries Funeral Home is assisting with arrangements. Mike was best known as co-founder of the ever-popular band The Night People along with Kenny White, his cousin Rob Dahms, Rich Collignon and Gary Pearson. Together they played their way into the hearts of thousands at the legendary Draught House, Col Ballroom and many other venues in the eastern Iowa and western Illinois region.

Mike came from a long line of professional musicians dating back 100's of years to their family's homeland in Austria. He was taught piano at age 5 by his father, Joe and grandmother, Nellie. Already a virtuoso in grade school, he was often asked to play the piano at Madison Elementary Christmas and other shows. At age 16, in order to play in rock bands, he learned guitar in 1961 and began playing gigs. But at this point, music was set aside for baseball. After graduation in 1963 at Davenport Central he received a baseball scholarship to the University of Iowa, however his career was cut short by a sciatic nerve issue. He later became a highly successful coach in Davenport East Little and Pony Leagues.

After leaving Iowa City in 1964 and with new guitar in hand, he was armed and ready to become the "Paul McCartney" of the Quad Cities. The Night People were eventually inducted into the Iowa Rock and Roll Hall of Fame in 2017. A few other musical highlights include opening for Jimmy Hendrix at the Col in 1968, playing keyboard for Chuck Berry and was offered to travel with Reba McIntyre. He married Kathleen (Elliott) Witt in 1973 and they had 3 sons. They later divorced and he married Mary Motto in 1992.

Aside from music, Mike was an avid auto racing fan having attended his first midget car race in Davenport in 1949. He loved to watch midgets, sprint cars, Indy and stock cars. He raced go Karts in the 70's and 80's before turning the wheel over to his son. He then owned an open wheel modified and a midget race car. During winter months, Mike could be found racing slot cars on his homemade wooden track.

Mike Stroehle was a unique one-of-a-kind character, full of shenanigans that knew how to extract the most fun out of life and had a way of making everything more fun for the rest of us. His kind and gentle soul will be missed and never forgotten by many.

Online condolences and remembrances may be expressed by visiting Mike's obituary at www.hmdfuneralhome.com.

To plant trees in memory, please visit our Sympathy Store.
Published by Quad-City Times on Jan. 3, 2021.
MEMORIAL EVENTS
No memorial events are currently scheduled.
To offer your sympathy during this difficult time, you can now have memorial trees planted in a National Forest in memory of your loved one.
Funeral services provided by:
Halligan-McCabe-DeVries Funeral Home
MAKE A DONATION
MEMORIES & CONDOLENCES
Sponsored by Halligan-McCabe-DeVries Funeral Home.
7 Entries
Mike and the band made so many memories from my past. Our sincere condolences for your loss.
Bill Swaim
January 21, 2021
Just hearing about Mike´s passing and, I wish to pass my condolences on to the family.
Aaron Shad Doyle
January 12, 2021
God bless you my dear friend. Your music will live with me forever. I even idolized you. Bless your family.
Bill Whipka
January 5, 2021
We have so many Great memories of Mike from the DRAUGHT HOUSE and Col Prayers to the Family So very Sad
Brad and Jann Zoeckler
January 5, 2021
I'm truly sorry for Your loss. I knew Mike, back in the day, when He 'tryd' to teach my Sister & me, how to play guitar. We had fun talking & learning to play. I couldn't learn it, becoz I couldn't wrap my fingers around the neck! My Sister Sue, was more of a percussionist & later, I played the saxophone. May the good Lord be with You all, when the days turn to years. He'll never leave You. God bless You all!!
Jean Calkins Reyes
January 3, 2021
We have been friends with Mike for well over fifty years, great musician, great boogie boogie playing piano man, and a fun guy always and in all ways.....Mike will be missed but his music and the memories he gave us all will be forever....Mike gave us his all, and now he plays in heaven for all eternity. We will see you one day again, until then rest easy.....
Sonny & Nancy Ashcraft
January 3, 2021
Our deepest sympathy to his family and friends. A lot of our best memories were made listening and dancing to his music. He will be in our hearts forever.
Ron and Roberta Roehlk
January 3, 2021
Showing 1 - 7 of 7 results