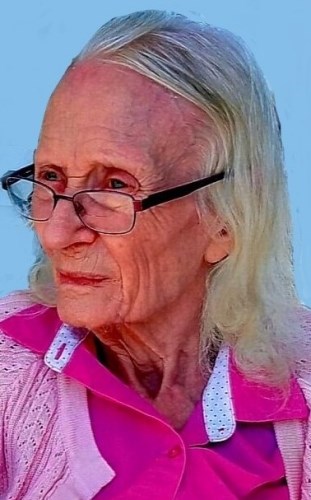 Katie Jo Whitlock, 94, passed away on Tuesday November 17, 2020 at Riverview Manor Nursing Home in Pleasant Valley, Iowa. A private service will be held at a later date at Cunnick-Collins Mortuary. Online condolences may be expressed at www.Cunnick-Collinsmortuary.com

Katie was born on October 5, 1926 in LaPlata, Mo to Fred Raymond and Beulah (Arnett) Johnston. She attended LaPlata schools and graduated from LaPlata High School. She married Robert (Bob) Charles Whitlock in 1946 in Kirksville, MO, and together they had three children. Katie worked for many years as a nurse's aide at St Luke's Hospital (Genesis East).

She was a member of the Quad City Times Plus 60 Club. She enjoyed walking, watching her son Dennis race stock cars, NASCAR, her favorite driver was Rusty Wallace, she loved the Kansas City Chiefs, and the Denver Broncos.

She was preceded in death by her husband, parents, brother Teddy Johnston, and granddaughter Misi Hayne Kwinski. There will be no visitation.

To plant trees in memory, please visit our Sympathy Store.
Published by Quad-City Times on Nov. 19, 2020.
MEMORIAL EVENTS
No memorial events are currently scheduled.
To offer your sympathy during this difficult time, you can now have memorial trees planted in a National Forest in memory of your loved one.
GUEST BOOK
4 Entries
Denny sorry to hear about your Mom.
Tom & Joan Fier
November 28, 2020
Denny, Amy, Brent and family, We are so very sorry for your loss. Denny, you have been an amazing son which makes you a great man. Sending you all hugs and prayers.
Russell and Renee
November 21, 2020
Denny and family I am so very sorry for your loss. My deepest condolences!
Madge James
November 20, 2020
Dennis. I was saddened to hear of the loss if your mother . I will remember her for soft spoken fiestiness!! my thoughts are with you and your family!!´
Dori Neidt. Property manager Luther towers and Luther crest
November 19, 2020