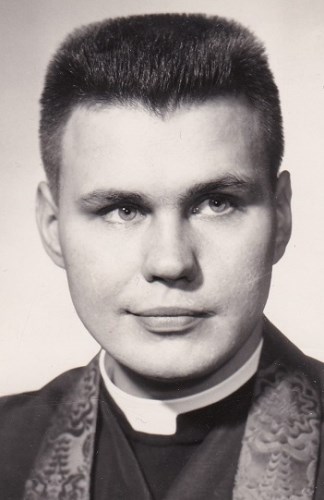 The family would like to thank the staff of New Perspective and Compassus Hospice nurses for their compassionate care.

Kenneth Swanberg was born on July 13, 1930 in Jamestown, NY, the son of P. Herman and Esther L. (Fagerlund) Swanberg. He graduated from Jamestown High School in 1948 and was known as a "math brain" and a "swell kid". He then went to Upsala College where he received his B.A. Ken married Josephine Hattie Carter on March 28, 1953, in Jamestown, NY. Ken went on to receive his master's degree in 1972 and later his Doctor of Ministry in 1977 studying the effects of "justification to mental health" from Lutheran School of Theology at Chicago.

Ken served on the New Jersey District Youth Committee as Chair. He served as N.J. District Secretary and Treasurer. In Chicago he was a member and later the VP of the South Shore Commission. Rev. Dr. Swanberg was included in Mayor Daley's initiative to facilitate the restoration of community peace amidst the late 1960's unrest. He was an advisory member of Chel-Win Community Organizations, and advisory board of Boy Scouts in Chicago. Ken was the V.P. of the Kiwanis Club South 540 in Chicago and President and Vice president of the South Shore ministerial organization in Chicago. He served as pastoral advisor to the Soya (45-50 young adults) who had various programs, service projects representing the churches of the south Chicago district churches for 3 years. Ken chaired a committee to form a hospital chaplaincy service at Freeport Memorial Hospital. The first step was organizing several pastors as volunteers from the community churches and train them for this responsibility. After moving to Moline, he helped to establish the same type of program at Moline Public Hospital. Pastor Swanberg was instrumental in the resettlement of refugees from Vietnam and the indigenous Hmong people of Laos, here in the quad cities and baptized many. Ken was appointed to serve on the Boy Scouts of America Executive Committee in Freeport, where he later served on the advisory board. He also helped establish the first Sea Scout Post in Chicago. In Chicago Ken served on the Synod's Stewardship Committee in Michigan. Ken served as Camp Director for church camping for many years.

Ken earned a rank of Eagle Scout. He gave the dedication address and the prayer of dedication for the new water treatment plan in South Shore. Ken received an honor as "Teaching Pastor" in Moline. Ken was invited by the Swedish Archbishop to visit Sweden, giving a sermon in swedish. He served 3 weeks as a resource person for parish evangelism Uppsala province, and served communion in the Uppsala Cathedral at high assa.

Ken had many hobbies that he enjoyed. He loved watching sports whether it be the Cubs, Bears, and especially the Ohio State Buckeyes. He enjoyed camping in his Shasta trailers, picnics, just being outdoors, and was an avid chess player. Ken loved to travel, trips included Florida, Sweden, Colorado, taking cruises to Alaska, and Guatemala where he did his research for his Master's Degree. Ken loved and knew things most people would not know about the Civil War and World War II.

He was preceded in death by his wife, Josephine Swanberg, parents, 2 infant brothers and 1 nephew.

To plant trees in memory, please visit our Sympathy Store.
Published by Quad-City Times on Sep. 20, 2020.
MEMORIAL EVENTS
Sep
21
Visitation
4:00p.m. - 7:00p.m.
Esterdahl Mortuary & Crematory Ltd
6601 38th Ave, Moline, IL 61265
Sep
22
Burial
11:30a.m. - 12:00p.m.
Moline Memorial Park
Funeral services provided by:
Esterdahl Mortuary & Crematory Ltd
GUEST BOOK
5 Entries
It is with great sadness we heard of the passing of Pastor Swanberg. We extend our condolences and are praying for his family. God bless and keep you all in His own peace.
Remembering your father with great fondness,
From a members of his Mamrelund congregation,
The Youngquist Family
Cheryl Currier
Friend
October 5, 2020
We remember Der Kleine Stuge at Lake Geneva, WI. Camp Augustana was our escape from reality when we rented a cabin for several years. We played games and had lots of fun together with our family and your family. Remember going across the busy street to the hotel and playing the games they had there! (air hockey, etc.) FUN! We have memories of good times there. May your many years of happy memories give you comfort now. And may God's peace be surrounding you as you go through this difficult time. God bless you all with special thoughts and memories of both of your parents.
Rev. Bill and Diana Welk
Rev. Bill and Diana Welk (friends)
Father
September 23, 2020
Ken was much more than a pastor. He was a dear friend, he will be missed so much. To all his family I am so sorry for your loss. Your dad was a wonderful man and I for one will never forget all his kindness and friendship he showed me and my family over the years since he came to Calvary.
Jerry Walker
September 22, 2020
Heartfelt sympathy and prayers for you and your family. God Bless you all
Connie McKean
September 21, 2020
Our sympathy for your loss. We remember Pastor Ken's support and encouragement at Calvary.
Rich and Sandy Strosahl
September 20, 2020