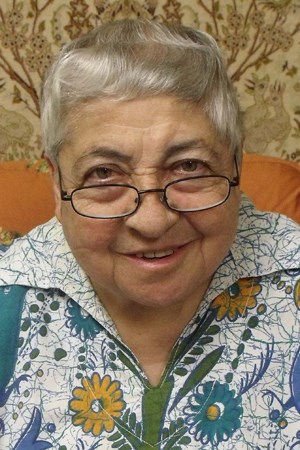 Sister Luz Maria Orozco, CHM, 87, died September 13, 2021, at the home of a friend in Pittsburgh, PA. The cremated remains will be buried later. Services will take place at St. John Fisher Church in Churchill, PA, on Saturday, September 25th. Private services will take place at the Humility of Mary Center in Davenport, IA, with a memorial service at 6:30 pm on September 27th and a memorial mass at 11 am on the 28th; both will be live-streamed.

Luz María Orozco was born November 3, 1933, in Mexico City, México, to Isidro Orozco Portugal and María del Rosario Martínez Aragón de Orozco. She entered the Congregation of the Humility of Mary in 1958 and professed vows in 1960.

Sister received a double BA degree in French and English from Marycrest College in Davenport, IA, in 1956, and completed her MA in English from Marquette University in Milwaukee, WI, just weeks before entering the Congregation in 1958. She earned a PhD in Comparative Literature from the University of Minnesota, Minneapolis, and was a two-time English Fulbright Scholar at Oxford University in England, both in 1973. In 1974, she did post-graduate work at Notre Dame College in Waterloo, Canada, and in 1986 was a scholar and visiting professor at Yale University in New Haven, CT.

S. Luz María's ministry of education shifted frequently between that of the student and that of the teacher. After completing her MA, she was a Professor of English at Marycrest College from 1960-1967. She then embarked on nearly a decade of post-graduate studies before spending the 1986-87 academic year as a visiting professor at Yale. During this time, she retained her regular appointment as a Professor of English and Spanish at Marycrest College/Marycrest International University. When Marycrest closed in 2002, she served as a substitute teacher at Assumption High School in Davenport. Other academic awards included the Danforth Teacher Grant and the Sears-Roebuck Foundation Independent Higher Education Teaching Excellence Award.

In 1993, S. Luz María was inducted into the World's Who's Who of Women for her contribution to the academic world. When asked by the Rock Island Argus in 1985 why she entered teaching, she replied "This was obviously the best way of uniting my Spanish heritage and my British education and my French major." Her life was one striving for balance and an aversion to being one-sided. While her study focus shifted from her initial Marycrest enrollment in medical technology, backed by a music scholarship, to English literature, she also embraced athleticism, regularly engaging in volleyball, tennis, swimming, and skateboarding. She was an avid writer, from formal scholarly articles, to letters to newspaper editors, to the award-winning poetry that helped her restore her inner balance. Above all, she embraced humor, both in her studies and her life, whether in citing humorous newspaper articles from 18th century England or using soap operas to teach Greek classics, a method that culminated in the paper "As The World Churns: The Classics as Soaps," which was presented to the National Linguistic Humor Conference and earned an invitation to an international conference in Ireland.

S. Luz María is preceded in death by her parents, her sisters, Ana María Orozco, CHM and Lolita Orozco and brother, Francisco. She is survived by a sister, María Teresa Orozco de Arguelles, a nephew, three nieces and members of her CHM community.

Memorials may be made to the Congregation of the Humility of Mary.

Published by Quad-City Times on Sep. 24, 2021.
To plant trees in memory, please visit the Sympathy Store.
MEMORIAL EVENTS
Sep
25
Service
St. John Fisher Church
Churchill, IA
Sep
27
Memorial service
6:30p.m.
Humility of Mary Center
Davenport, IA
Sep
27
Memorial service
6:30p.m.
Live streamed
IA
Sep
28
Memorial Mass
11:00a.m.
Live streamed
IA
Sep
28
Memorial Mass
11:00a.m.
Humility of Mary Center
Davenport, IA
Funeral services provided by:
Halligan-McCabe-DeVries Funeral Home
MAKE A DONATION
MEMORIES & CONDOLENCES
Sponsored by Halligan-McCabe-DeVries Funeral Home.
5 Entries
Sister Luz Maria was both my Spanish and English teacher. I think of her often and am deeply saddened by her passing.
Patricia Kearns-Michaelsen
School
September 24, 2021
Sister Orozco was one of my English Professors at Marycrest. She, along with Jan Luton, we´re the two that made it a point to say that they thought I´d be a great teacher. She´d often stop me and ask about how basketball was going , or making sure my `stuff´ for class was getting done (small college). These things obviously had an effect on me and the confidence to go do what I wanted to do, which was to teach. I´m embarrassed to say I was unaware of the incredible background in education that Sister Orozco had. So impressive. I guess I just simply remembered her as a really nice professor that cared about who I was and how I was doing. Im grateful for that. I´m currently in my 25th year as a teacher and love it. My condolences to the family of Sister Orozco. She touched many lives.
Sam McDonald
September 24, 2021
Sr. Luz was such a wonderful teacher and friend. She was loved by many. Love, Valerie Brekke
Valerie Brekke
School
September 24, 2021
Rest in heavenly peace. I´ll always fondly remember our Marycrest years. Thank you for your many years of service and dedication to education.
Kimberly Keslin
School
September 24, 2021
Sr. Luz Maria was my favorite professor at Marycrest. I loved her passion for life and dedication to teaching. She had a wonderful sense of humor!
Michael Terrill-Liesz
School
September 24, 2021
Showing 1 - 5 of 5 results