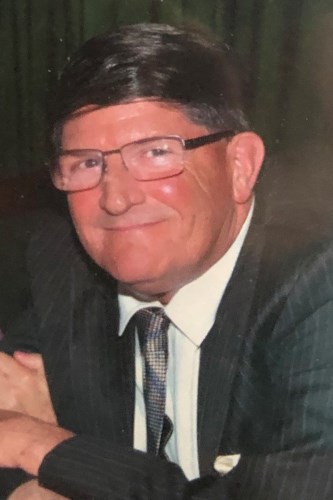 BETTENDORF-Patrick Lawrence Coogan, 69, of Bettendorf, passed away, March 25, 2021 at his home.

A Celebration of life will be held 2:00 p.m. Monday, March 29, 2021 at Halligan McCabe DeVries Funeral Home in Davenport. Visitation will be 1:00 p.m. – 2:00 p.m. Monday. Burial will be in Mt. Calvary Cemetery. Memorials may be made to Muskies, Inc. or UnityPoint Trinity Hospice.

In his high school years, as a Bettendorf Bulldog, Pat lettered in football, basketball, and track, and was co-captain of the football and basketball teams his junior and senior years. Pat played football for the University of Dubuque his freshman year and graduated from Iowa State University with a degree in Finance and Business Administration. Pat worked for Deere & Co. for 40 years, retiring in 2013. He was on the Board of Directors at Skills, Inc. He had been the President, Vice President and Secretary of the Wild Eagle Lodge Condo Association as well as a volunteer financial consultant for S.C.O.R.E. He was a house manager for Phi Delta Theta and a member of Muskies, Inc. Pat was an avid Iowa Hawkeye, Green Bay Packer, and St. Louis Cardinal fan. He enjoyed spending time muskie fishing, eagle watching and outings on his pontoon boat, MH HOF in Eagle River Wisconsin.

Pat was preceded in death by his parents, and sister Kathleen Coogan.

To plant trees in memory, please visit our Sympathy Store.
Published by Quad-City Times on Mar. 27, 2021.
MEMORIAL EVENTS
Mar
29
Visitation
1:00p.m. - 2:00p.m.
Halligan McCabe DeVries Funeral Home
614 Main Street, Davenport, Iowa 52803
Mar
29
Celebration of Life
2:00p.m. - 2:30p.m.
Halligan McCabe DeVries Funeral Home
614 Main Street, Davenport, Iowa 52803
Funeral services provided by:
Halligan-McCabe-DeVries Funeral Home
GUEST BOOK
Sponsored by Halligan-McCabe-DeVries Funeral Home.
6 Entries
So sorry to hear of Pat's passing. Although I had not seen him in awhile it was always great to catch up and talk about days at the Phi Delt house at Iowa State or our days at John Deere. Deepest sympathies to Janet, Dan and the family.
CLAIR PETERSON
March 29, 2021
Janet and Family: My sincere sympathies for your loss. Sending prayers for your strength at this difficult time. Sincerely, Gloria Nelson
Gloria Nelson
March 29, 2021
Janet, my deepest sympathies go out to you and your family. As your letter carrier I enjoyed talking with my customers immensely, especially you and Pat. Chuck Your retired letter carrier
Chuck Schuette
March 28, 2021
Janet: Our prayers and thoughts are with your family and you during this difficult time.
Leo Holland
March 28, 2021
So sad to hear of the passing of a teammate and friend from the Class of 69. Pat was a great tightend eventhough coach Oles rarely allowed us to throw the ball. We ran the ball his way most often. Robin and I would like to extend our deepest sympathies to Pat's family.
Tim Cederblad
March 28, 2021
I am so sorry to hear of Pat´s passing. Although we have not seen each other in many years, I have thought of you often. My deepest sympathy to you Janet, and your family as you start on this journey without Pat by your side. Sincerely, Sara and Marty Skeels
Sara & Marty Skeels
March 27, 2021