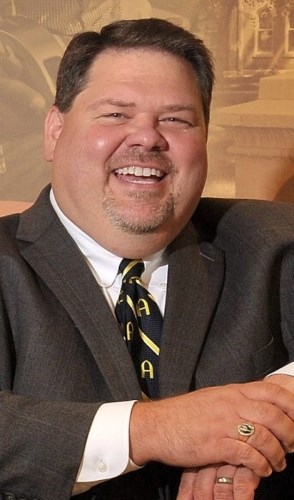 ROCK ISLAND-R. Dale Owen, 52, of Rock Island, ascended to meet his heavenly father on Saturday, November 14, 2020 after a five month battle with pancreatic cancer. He was blessed to be at his home surrounded by his loving wife Angie, his sister Chris, and other close family members at the time of his passing. There will be a live-streamed funeral broadcast at 12 pm (Noon) on Sunday, November 22, 2020 by visiting www.wheelanpressly.com/live-stream. A drive-thru visitation will be from 1-4 pm Saturday, November 21, 2020 at Wheelan-Pressly Funeral Home and Crematory, 3030 7th Ave., Rock Island. The staff will direct you as you arrive. Please stay in your vehicles. Burial will be private at Memorial Park Cemetery, Rock Island. Memorials may be made in care of the Ascentra Credit Union Foundation, Augustana College, Iowa Credit Union Foundation or the Rock Island/Milan Education Foundation.

Dale had been the President and CEO at Ascentra Credit Union in Bettendorf, Iowa since 2013 and also served as the current Board Chair of the Iowa Credit Union League, in Des Moines, Iowa. He received his master's degree in public administration from Drake University in Des Moines, Iowa, a bachelor's degree in public administration from Augustana College in Rock Island, Ill., and an associate's degree in banking and finance from Black Hawk College in Moline, Ill. He also held the Certified Chief Executive (CCE) designation from the Credit Union Executives Society (CUES). He graduated from the CUES CEO Institutes conducted at the Darden School of Business at the University of Virginia, the Johnson Graduate School of Management at Cornell University, and The Wharton School at the University of Pennsylvania.

Dale was a fierce credit union advocate who was truly dedicated to improving the financial lives of others. Dale exemplified the credit union philosophy of "people helping people", and encouraged others around him to be of service, get involved and pay it forward. Dale loved his credit union - a love that transcended to their staff, members, and the communities Ascentra served.

Dale was a proud Rock Island native and supported Rock Island High School and Augustana College in many ways. He encouraged lifelong learning at all levels and wanted all to have the opportunity to learn and gain knowledge. Community involvement was so very important to Dale. He wanted to see all communities thrive and grow. Regularly, Dale would give his time and talents to organizations to provide insight and ideas to keep our Quad Cities moving on a strong growth trajectory. He was a true "Quad Citizen".

Friends were a huge part of Dale's life. If he knew you, he called you a friend. Dale had a big heart and love flowed out of it every day. There was a special group of friends that Dale connected with on a regular basis. If you are reading this, you know who you are because Dale reminded you each time he spoke with you.

Dale was a devoted husband, father, brother, and uncle. Family meant the world to him. Angie was his soulmate. Both graduates of Rock Island High School in 1986, Dale and Angie found each other again later in life and became united in marriage on May 4th 2013. In the time Dale and Angie had together, they enjoyed traveling, making memories with family, and just being together. Dale adored all of his children, nieces and nephews. He was always available to support and guide them whenever needed. Even his favorite sister Chris held a special place in Dale's heart.

Those left to cherish his memory include his wife, Angela Owen, Rock Island; children, Nick, Megan, Allison, Kyia, and Duston (Lani) and their children, Emily and Peyton; sister, Chris (Jeff) Aversing, Milan; nieces and nephews, Katie (Trent) Jochim and their daughter, Savanna, Hayden (Alex Sumner) King and Pierce and Carly Klingbiel; his mother-in-law, Linda Smiley; many aunts, uncles and cousins; and his Ascentra Credit Union Family whom he cared about dearly.

Angie and all of Dale's family would like to express thanks and gratitude to the doctors for their compassion and treatment protocol during the past five months. Many thanks go out to family, friends and colleagues who prayed, sent notes of encouragement, brought meals, and kept the love flowing to Dale and his family during this difficult time.

Dale never gave up, he fought hard and always remained optimistic even when things got difficult. If you spoke with Dale over the past few months, the first thing he would ask was, "how are you?" Dale always put others first and until his very last breath encouraged others to "be the light".

Online condolences, memories and expressions of sympathy may be left for the family at wheelanpressly.com.

To plant trees in memory, please visit our Sympathy Store.
Published by Quad-City Times on Nov. 17, 2020.
MEMORIAL EVENTS
Nov
21
Visitation
1:00p.m. - 4:00p.m.
Wheelan-Pressly Funeral Home - Rock Island
3030 7Th Ave, Rock Island, IL 61201
Nov
22
Funeral
12:00p.m.
live-streamed by visiting www.wheelanpressly.com/live-stream
Funeral services provided by:
Wheelan-Pressly Funeral Home - Rock Island
GUEST BOOK
1 Entry
My deepest sympathies to the family and employees of Dale. He never forgot a face or a name. I´ve known him for many years. Kind, smart, devoted to his work and employees, he was a huge asset to our community. Just a gem of an individual. He will be missed.
Becki Wells
November 17, 2020