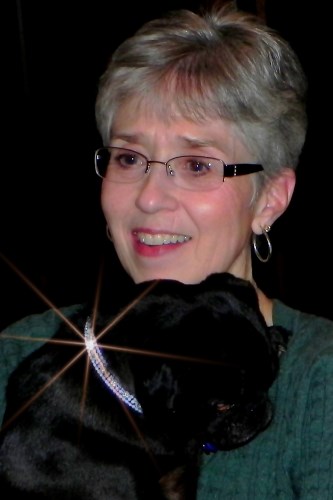 Becky was born in Davenport, Iowa on November 21, 1948, the daughter of Marvin L. and Sally (Swartz) Bashaw.

She graduated from Bettendorf High School in 1967. Becky was active in the Bettendorf Order of Rainbow for Girls as a Worthy Advisor. She had a passion for music and a love for pug dogs. She met her husband of 34 years in Bettendorf, Tibor (Ted) Berenyi an engineer for Deere.

Earlier in life, she was married to Bill Canfield of Bettendorf, they had two children, Scott and Amy.

In her professional life she assisted in the dental and medical field in the Quad Cities. She was office manager for Mississippi Valley Oral and Maxillofacial Surgery until her retirement in 2001.

Becky and Ted enjoyed traveling in the US and Europe, and Ted became a "Pug Dad" to many beloved pugs!

Becky bred and raised pugs, several litters through the years. She partnered with her mother in showing the pugs. She was especially proud of her champions. Becky and Ted rescued several pugs through APARN in Arizona. Her "puggies" were the spice of her daily life.

Becky had an amazing singing voice and was active in the choir at Sacred Heart Cathedral in Davenport. A highlight for Becky was singing at the Vatican in the fall of 2005. She remained active in her church in Arizona.

Becky will be missed very much as a wife, mother, sister, aunt and friend.

Those left to cherish her memory include her loving husband Ted; son and daughter, Scott and Amy Canfield, both of Chandler, AZ; her pugs, Phoebe and Stella; sister, Pam Bashaw, Bettendorf, IA, brothers, Tim (Karen) Bashaw, Bettendorf, IA and Doug Bashaw, Naples, FL, brother and sister-in-law, Steven and Martha Berenyi, Zionsville, IN. and sister and brother-in-law, Katy and Warren Steinborn of Indianapolis. Becky is also survived by her Aunt, Dorothy (Bashaw) Martin, Clearwater, FL; and numerous family members including cousins, nieces and nephews, great nieces and great nephews throughout the United States.

She was preceded in death by her parents and her in-laws (Tibor and Katalin).

Per her wishes, cremation rites were accorded and services are planned for later in the year.

To plant trees in memory, please visit our Sympathy Store.
Published by Quad-City Times on Jan. 5, 2021.
MEMORIAL EVENTS
No memorial events are currently scheduled.
To offer your sympathy during this difficult time, you can now have memorial trees planted in a National Forest in memory of your loved one.
GUEST BOOK
4 Entries
Tim & Karen, My deepest sympathies to you!! I remember working on Becky and Teds house in Bettendorf many years ago. Special fun lady!!! Hugs and prayers! Gail
GAIL DOVER
January 6, 2021
I will always hold Becky in a special place in my heart! She was such a classy lady! Love you Becky and deepest sympathy to Ted and your family!
Dana and Tony Wehrle
January 5, 2021
Our sympathy to the family. We will miss you my dear friend.
Sandy and Kermy Hansom
January 5, 2021
My deepest sympathy
Carol Engels
January 5, 2021