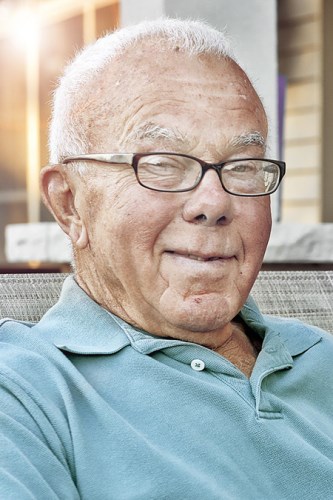 Richard "Dick' Coster, a prominent Rock Island veterinarian for nearly 45 years, passed away at his Fyre Lake home on October 7, 2021. A wildlife enthusiast, model of self-reliance and generous friend.

Dick was born in Blue Earth, Minnesota. He grew up on a farm in Little Rock, Illinois, where he developed a lifelong love of nature and animals. After earning his degree in veterinary medicine from the University of Illinois. Dick owned and operated The Rock Island Animal Hospital, from 1958 until the age of 72.

Dick and his then wife Virginia, now deceased, raised three children. They recall a father who stressed the importance of education and always supported their individual interests. In 1998 he married, Sandria Doeckel, the love of his life, now deceased.

For others, "Doc Coster" will be most remembered as an accomplished fisherman and hunter. He regularly caught crappie, bass and muskie, seemingly at will. And, at the age of 88, he successfully downed, and field dressed a deer by himself. Although he loved nothing better than to sit on his deck and watching the sun set over the lake. Dick's love of the outdoors could coax him to travels that ranged from Alaska to Central America.

The Coster family will be holding a private celebration of Dick's life, Saturday the 16th of October at 1123 Fjord View Dr. Sherrard, IL, from 3 to 7pm.

Published by Quad-City Times on Oct. 13, 2021.
To plant trees in memory, please visit the Sympathy Store.
MEMORIAL EVENTS
Oct
16
Celebration of Life
3:00p.m. - 7:00p.m.
1123 Fjord View Dr, Sherrard, IL
Funeral services provided by:
Wheelan-Pressly Funeral Home - Rock Island
MAKE A DONATION
MEMORIES & CONDOLENCES
Sponsored by Wheelan-Pressly Funeral Home - Rock Island.
3 Entries
Dr Coster treated several of our animals. We trusted his diagnoses and treatments. He was straightforward and honest. May God bless his family with wonderful memories.
Denise and Gene Strathdee
October 17, 2021
Dick will be so missed. Dick was a loving friend. We enjoyed traveling to Costa Rico, cruising the Panama Canal, going to concerts , and drinking cocktails as we went on put-put boat rides around Fyre Lake. Our sons and grandsons enjoyed going fishing with Dick who knew where the fish were and how to catch them. DICK WILL BE SO MISSED.
John and Diann Carran
October 14, 2021
We are so sorry for the loss of your Dad. He was truly one of a kind. Prayers and thoughts for each of you
Mike and Debi Weingartz
Friend
October 13, 2021
Showing 1 - 3 of 3 results