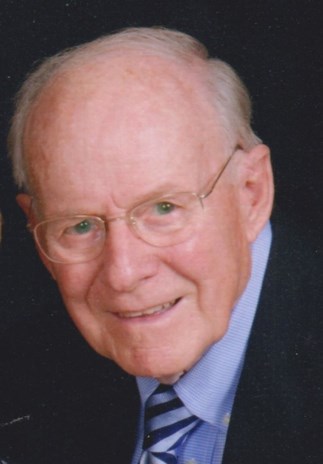 BETTENDORF-Richard Lee Hofmann, 91, of Bettendorf, IA, passed away Saturday, December 5, 2020 at Clarissa C. Cook. Private family services will be livestreamed via Facebook (https://www.facebook.com/TheRunge) on Monday, December 14, and he will be laid to rest in National Cemetery. Online condolences may be expressed at www.rungemortuary.com.

Rich was born to Albert and Catherine Hofmann, September 25, 1929, in Greenfield, IA. He married Norma Kirlin on December 22, 1951, in Greenfield, IA. Rich witnessed the testing of the H-Bomb on the island of Eniwetok, in 1954 as part of his 4 year Naval Service during the Korean War. He graduated from the University of North Texas with a degree in accounting. After graduating from college, he and Norma moved to Bettendorf, IA. They had two daughters, Diane and Barbara. He worked as a cost accountant and retired as head cashier for IH in East Moline. Rich was a lifetime member of the American Legion, an active member of the LeClaire Lions and Asbury Methodist Church. After his retirement, he and Norma wintered in Tucson, AZ, for over 20 years. He liked to travel, do carpentry, bowl, play golf, and hike.

Rich was preceded in death by his parents, and a baby sister, Mary Ruth.

To plant trees in memory, please visit our Sympathy Store.
Published by Quad-City Times on Dec. 13, 2020.
MEMORIAL EVENTS
No memorial events are currently scheduled.
To offer your sympathy during this difficult time, you can now have memorial trees planted in a National Forest in memory of your loved one.
Funeral services provided by:
The Runge Mortuary and Crematory
GUEST BOOK
Sponsored by The Runge Mortuary and Crematory.
4 Entries
My deepest condolences to Norma and her family. I thank you for always doing whatever you could to help Rich continue to live his best life for as ling as he could! I have missed seeing Rich's smile this year! I was always i awe of his hard work and determination to keep moving! Hugs and prayers from all of us at Rock Steady Boxing Genesis!!!
Danielle Roberts
December 15, 2020
Norma and Diane and family. So sorry to hear about your loss. I know how your heart is sad and we all thought he was a great guy and a friend to all. RIP Rich
Tom Hopkins
December 14, 2020
Dear Diane and family, I'm sorry to see that your Dad passed. Hugs to all of you.
Patty Altman-Leeds
December 14, 2020
Our sympathy to you, Norma. May Rich be in peace after such a long struggle.
Arlene & Gene Vincent
December 13, 2020