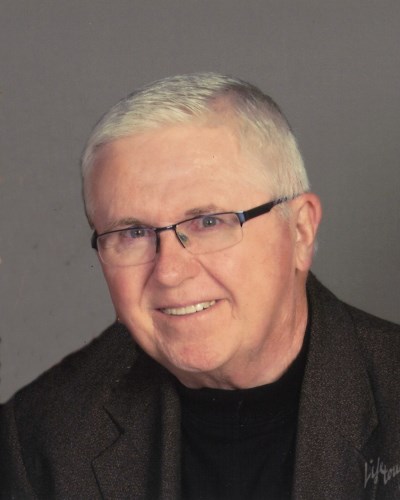 DAVENPORT-A Memorial Mass for Robert J. "Bob" Hughes, 74, a resident of Davenport, will be at 10:30 a.m. Saturday, October 2, 2021, at St. Paul the Apostle Catholic Church, Davenport. The Mass will be livestreamed by visiting Bob's obituary at www.hmdfuneralhome.com. Private family burial will take place in St. Ann's Cemetery, Long Grove at a later date. The family will greet friends Friday from 4-7 p.m. at Halligan-McCabe-DeVries Funeral Home, downtown Davenport with a prayer service offered at 6:30 p.m. There will be an additional visitation at church Saturday from 9:30 a.m. until the time of the service. Memorials may be made to the family to be distributed among Bob's favorite charities.

Bob passed away Friday, September 24, 2021 at home surrounded by his adoring family after a brief but courageous battle with cancer.

Robert John Hughes was born March 31, 1947, in Monticello, Iowa, a son of John and Rita (Duffy) Hughes. Bob was united in marriage to Madonna Marie "Donna" Coyle on August 5, 1967 at St. Martin's Catholic Church, Cascade, Iowa while attending Loras College. They have celebrated 54 years of marriage and memories together.

Bob taught at Resurrection Catholic School prior to his career with John Deere in Dubuque before moving to Davenport Works in 1976. During Bob's career at Deere, he moved to human resources during which time he earned his Master's Degree in Industrial Relations from the University of Iowa. He retired from Deere as a manager of the Leadership Development team within Global Talent Management. He thrived at coaching his colleagues and helping people unlock their potential. Bob also relished his time as an adjunct professor at the University of Iowa and at St. Ambrose University.

Bob was a man of great faith and championed the CEW movement in the Davenport area after experiencing the power of it in Dubuque. He was a voracious reader which fueled his passion for learning. Bob and Donna loved to travel, and his career took him all over the globe. Bob had a knack for discovering new food and community whether at home, in small town Iowa, or across the globe in Pune, India. He also enjoyed playing golf and cards with his friends and family. He delighted in spending time with his family and grandchildren, and supporting their endeavors. Bob was a man of stories, those he told and the many his family and friends have about him, which will be a source of comfort as we grieve his passing. He was keenly aware of the abundance and beauty of his life and expressed his gratitude for it through his final days. He will be missed by all who knew and loved him.

He was preceded in death by his parents and siblings: Jean (Joe) Dunne, David Hughes, and Pat Hughes and his father-in-law and mother-in-law, Wilmer and Florence Coyle.

Published by Quad-City Times on Sep. 26, 2021.
To plant trees in memory, please visit the Sympathy Store.
MEMORIAL EVENTS
To offer your sympathy during this difficult time, you can now have memorial trees planted in a National Forest in memory of your loved one.
Funeral services provided by:
Halligan-McCabe-DeVries Funeral Home
MAKE A DONATION
MEMORIES & CONDOLENCES
Sponsored by Halligan-McCabe-DeVries Funeral Home.
8 Entries
Dear Donna, Amy, Missy and all the family, So sorry to hear this very sad news for your family. We always admired the strong faith filled family that sat in the front left side of St. Paul´s church. We always said "that is an amazing family and great role models to aspire to" while our little boys jumped around and under the pews. Love and prayers to you all. Sincerely, Dan and Pam
Dan and Pam Cruse
Friend
October 12, 2021
Bob, and me had a electric chemistry, as we worked together for John Deere, Pune India, more specifically for Technology centre. We had a great time to explore leadership, Organisation development, group dynamics, and also about various cultures, countries and our love for people. Whenever, i was in Quad city a lunch and dinner with Bob was special. He was very fond of me and was like a father figure. He was so happy to come to my home and meet my family and have dinner with us. I wish him eternal peace and bliss up there. Stay blessed. With love and fondest memories. Ullhas Supatkar, Pune, India.
Ullhas Supatkar
Work
October 1, 2021
Mr. Hughes (as I knew him at Resurrection) made the largest impact of any teacher in my life. He talked to us about important things and respected our viewpoints. Years later, I think of him very fondly. I´m sure he went on to be a wonderful father and it sounds like he had a great career after teaching. So sorry to his family for what I´m sure is a great loss.
Carrie Klauer
School
September 26, 2021
I am extremely sad to hear this news. Bob was my friend, mentor and guide. I owe a lot to him for guiding our Leadership team at John Deere Technology Center, Pune, India. He has visited us many times and conducted several workshops at his favourite offsite location at a hill station near Pune. We developed a strong bond as colleagues and friends. He was a great human being, full of love and care. I remember his last visit, when all of us we in tears during the farewell. To me, Bob is family. RIP. Bob, continue to guide us from your heavenly abode. We shall meet again. Love.
Sudhakar Shenoy
Work
September 26, 2021
So sorry to hear about Bob ! Will keep the family in our prayers ! May God Bless !
Ken Lyons
Friend
September 26, 2021
Worked with Bob at Deere and we had a lot of good memories and he was a great people person!! May he Rest In Peace.
Larry Foley
Work
September 26, 2021
It is extremely disheartening to hear this news. Bob has been a wonderful human being and have gone to greater length to keep people educated on leadership traits. Extremely affectionate, he would analyse problem and make it solvable with clear actIonables. He was my first leadership trait analyst and this news conjures memories of him come alive in fraction of second. Rest in peace Bob, we all will miss you...... !!!
Sudhir Thite
Work
September 26, 2021
I have so many memories of traveling the world with Bob. When I was finishing an expat in India, he was there to mentor me in a brand new job. His laughter, smiling eyes and heart will live on in my memory. Sending love, prayers and hugs to the family as you celebrate his life and miss him like crazy.
Paula Sparks
Work
September 26, 2021
Showing 1 - 8 of 8 results