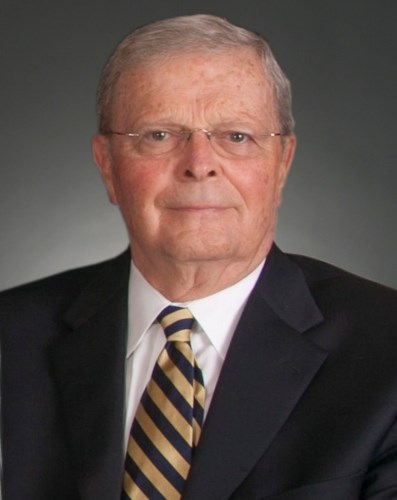 CLINTON-Robert P. Holleran, 81, passed away on Friday, August 21, 2020 at the University of Iowa Hospitals and Clinics, Iowa City, Iowa. That is the way obituaries usually begin but Bob set standards which affected many people, not just his family, and they in turn affect the next generation. That is surely some tangible form of immortality.

Bob Holleran was born in September 1938 and was a graduate of Clinton High School, as well as the College of St. Thomas in St. Paul Minnesota. After graduation, he began his career in banking working initially at the National Bank of Alaska for 8 years while concurrently serving as a member of the Alaska National Guard before moving back to Clinton in 1969 and joining Clinton National Bank as an Assistant Vice President for Commercial Lending.

For the next 50 years, Bob rose in the bank's management and served as President and CEO beginning in 1977. The record and growth of the bank under Bob's leadership were impressive and he was still an active member of the Bank's leadership and was at work last Friday.

Bob loved all cars, but most especially his collection of Model As. You might have seen him driving around Clinton in a Model A. His beloved dogs were his constant companions while he worked on his cars.

Bob had a gift to build confidence, perseverance, and faith in others. Many people have shared stories of how Bob inspired them to persist and excel in life.

Bob is survived by his wife of 54 years: Caryl; his children: Rob (Marsha) Holleran of Centennial, Colorado, and Lisa (Mike) Banker of Waukee, Iowa: four grandchildren: Elizabeth Banker, Tate Holleran, Lauren Holleran, and Katherine Banker: his brother: Brent (Johannah) Holleran of Naples, Florida; and several nieces, nephews, and cousins. He was preceded in death by his parents, Paul B. and Lucille Holleran, and his brother Lieutenant David Holleran, USAF.

To plant trees in memory, please visit our Sympathy Store.
Published by Quad-City Times from Aug. 23 to Aug. 25, 2020.
MEMORIAL EVENTS
No memorial events are currently scheduled.
To offer your sympathy during this difficult time, you can now have memorial trees planted in a National Forest in memory of your loved one.
Funeral services provided by:
Snell-Zornig Funeral Home
GUEST BOOK
1 Entry
As the days and weeks pass, and as you return to life's routine, may you continue to feel comforted by the love and support of family and friends.
Deb and Bill Vilmont
Acquaintance
August 25, 2020