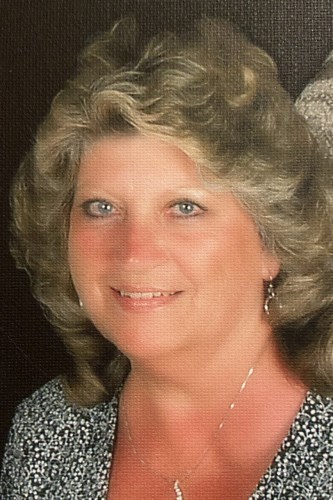 DAVENPORT-Vicky L. Schroeder Arp, 67, of Davenport, passed away peacefully surrounded by her children and sister, on Tuesday, July 6, 2021, at the University of Iowa Hospitals and Clinics.

Vicky was born February 5, 1954 to Robert and Henrietta (Bormann) Schroeder. She was the eldest of three children, and a part of a very close extended family. In her youth, Vicky enjoyed waterskiing on the Mississippi River and yearly trips to Vacation Village at Lake Okoboji. She participated in Luther League, and told a story of a convention trip where they had so many people in the bus bathroom that the window popped out. Her descriptions of her younger self portrayed a shy young woman, however she had many friends with whom she tried to keep in contact. She was nominated to the Homecoming court her senior year at West High School. After her graduation in 1972, she attended the Americana School of Beauty in Des Moines. Vicky was a cosmetologist for nearly 10 years, with her own shop, "Miss Vicky's Hair Salon," until she stopped in 1985 with the birth of her children.

Vicky married Gregory Allan Arp May 29, 1982 at Zion Lutheran Church, where they were members. She described Greg as "the love of her life," and "the absolute best." She often said he gave "the best hugs." Together they had twins, Christopher and Laura, and thrived as the best parents on the planet.

Vicky was a caring homemaker and helped Greg with his business, Greg Arp Homebuilders, before returning to work outside the home. Vicky worked as a para educator with the Davenport Community School District, and was employed by the DCSD for over 20 years. Most recently, she worked at Davenport West High School in the special education department.

Vicky's creative talent and love for helping others knew no boundaries. She often stayed up late or feverishly completed a project to make someone happy, always putting herself last to others. Vicky sewed choir outfits and created show choir set pieces; drove, stocked, and operated the Emeis Little League concession van; made floral arrangements; ran Dad's Club events; volunteered in the PTA; was active in the West High Boosters; and did plenty of Iowa football tailgating as her kids grew up. She won multiple HUG awards from the DCSD for her efforts. Vicky's children urged her to open a shop to sell her crafts, but she preferred to pour her love into their creation and donate them to benefit others. She perfected her whistle early on-it was a distinct sound that most who knew her could recognize. She loved her children's friends as her own, opening her home whenever they wanted. It brought her immense joy to sit outside at her pool and chat with "the boys." She loved her pool so much. When her children were in high school, she volunteered her time organizing the prom, which has led to nearly 20 years dreaming, designing, and executing amazing events for West High students. She also enjoyed time spent with friends, drinking margaritas and cruising the Caribbean, and went on as many cruises as Greg would agree. She spent her 65th birthday at Walt Disney World and took her family to Lake Okoboji, which allowed her to share some of her favorite vacation spots with her grandchildren. Although she excelled as a mother, she hit her stride as a grandmother. She spent as much time possible with her grandsons, opened "Gram's School" during the pandemic, spoiled them rotten, fed them all the McDonald's they could stomach, snuggled them tight, made the best Mickey Mouse waffles, and loved them "to infinity and beyond." Vicky's last selfless act was to be an organ and tissue donor. If she could not stay with us, it is only fitting she gave the chance and opportunity to countless others.

Vicky's family would like friends and family to visit for a Celebration of Life open house Tuesday, July 13, from 5-8 at the Starlite Ballroom, Mississippi Valley Fairgrounds. Wheelan-Pressly Funeral Home and Crematory is assisting the family. In lieu of flowers, contributions may be made to a memorial fund which will support the ALS Association, the Iowa Donor Network, the Special Education Department at West High School, and various other organizations close to Vicky's heart.

Vicky's family would like to extend a sincere and heartfelt "thank you" to the staff at the University of Iowa MICU for the exemplary care and compassion the showed during Vicky's last days.

We'll miss you forever, Mom. WE love YOU more.

Online condolences may be left for the family at www.wheelanpressly.com.