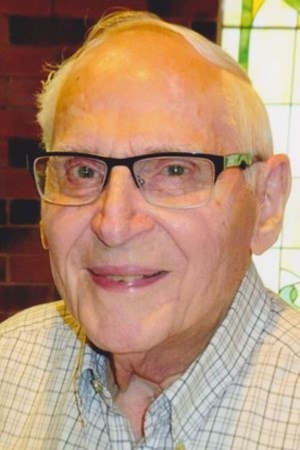 Wayne married Sue Ann Fiquette (deceased in 1999) on January 23, 1953 in Columbiana, AL. They had one daughter, Karen Machamer.

Wayne retired from General Electric Co. in 1992 after 35 years as Manager of Customer Relations in various locations over those years. He married Gayle Spaans on April 5, 2008. They have been living at Ridgecrest the last six years.

He was preceded in death by his parents; first wife, Sue Ann; brother, Kenneth; and his brother-in-law, John May.

Burial will be at the Rock Island National Cemetery alongside of Sue Ann. Memorials may be made to the Alzheimer's Association, 2208 52nd St., Davenport, IA, 52807. Online condolences may be expressed at www.rungemortuary.com.

Published by Quad-City Times on Sep. 24, 2021.
To plant trees in memory, please visit the Sympathy Store.
MEMORIAL EVENTS
To offer your sympathy during this difficult time, you can now have memorial trees planted in a National Forest in memory of your loved one.
Funeral services provided by:
The Runge Mortuary and Crematory
MAKE A DONATION
Please consider a donation as requested by the family.
MEMORIES & CONDOLENCES
Sponsored by The Runge Mortuary and Crematory.
1 Entry
Many many prayers to the family. Wayne was such a gentle soul!
Molly Parker
Other
September 26, 2021
Showing 1 - 1 of 1 results