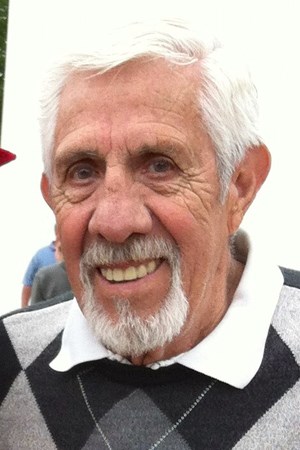 Bill was born in Chicago, Illinois in 1934. The family moved to Davenport few years later. Bill graduated from Davenport High in 1952. He lettered in multiple sports (Basketball, Football and track).

After a year of college, Bill enlisted in the army and served 3 years. In 1956, he married his high school sweetheart, Jacqueline Wright; they were happily married for almost 60 years until Jackie's death in 2016. After a few moves to Texas and back, they finally settled in Bettendorf, Iowa in 1968.

Bill had a long career in sales, selling life insurance and real estate. He owned numerous rental properties and flipped 40 homes. He was very active in sports over the years, playing competitive basketball and many hours of YMCA "nooners" basketball pick-up games. He also participated in several Senior Olympics competitions.

Bill loved to fish, play golf and was an avid darts (pics) player in the Quad Cities. He was nicknamed the "Hatchet man" for his unique throwing style. He was a local legend-at least he thought so!

Bill was a big Hawkeye fan and loved his Chicago Cubs, Bears and Bulls.

Bill was preceded in death by his wife Jackie, Daughter Debbie, Son John and Daughter in law Connie. May they rest in peace…

Online condolences can be made to the family by visiting Bill's obituary at www.weertsfh.com.

To plant trees in memory, please visit our Sympathy Store.
Published by Quad-City Times on Sep. 27, 2020.
MEMORIAL EVENTS
No memorial events are currently scheduled.
To offer your sympathy during this difficult time, you can now have memorial trees planted in a National Forest in memory of your loved one.
Funeral services provided by:
Weerts Funeral Home
GUEST BOOK
1 Entry
I have always had fond memories of Bill and his family. Please know I am thinking of all of you during this difficult time. My sincere condolences and sympathy to Dick, William and your extended families.
Melissa Boone
Friend
September 29, 2020