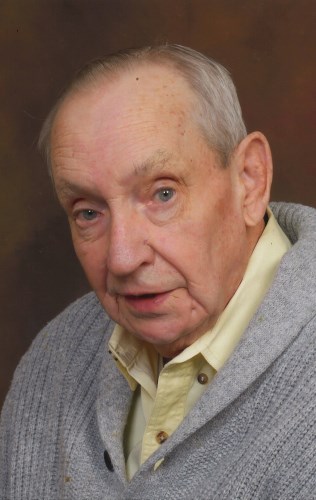 Funeral Services and a Mass of Christian Burial for William "Bill" Reagan will be 10:00a.m. Saturday, September 25, 2021, at St. Alphonsus Catholic Church, Davenport. Burial will be in Mt. Calvary Cemetery, Davenport. Visitation will be Friday, September 24, 2021 from 4:00p.m. to 6:00p.m. at the Halligan-McCabe-DeVries Funeral Home, Davenport, where the Rosary will be recited at 6:00 p.m. Bill died unexpectedly from a heart attack on Saturday, September 18, 2021.

William Edward Reagan, son of Martin and Dora (Badtram) Reagan, was born in Davenport, Iowa. He married Patricia (Wolfe) Reagan at St. Paul the Apostle Church in Davenport. He graduated from St. Anthony's grade school and St. Ambrose Academy and St. Ambrose University. He served in the United States Air Force during the Korean War. He owned and operated Reagan's Market in Davenport. Later he worked at Farmal International Harvester in Rock Island, Illinois. After that he worked for the Davenport Community School District. He was also a self-employed painter. Bill had a large family 14 children and 74 grand and great grandchildren.

Bill coached St. Alphonsus Dad's Club Softball Team, Junior High level for many years. He was a member of St. Alphonsus Church. The Holy Name Society. The Knights of Columbus. Bill received the Senior Internship Program "Older Worker Award" In 2010 from Generations Area Agency on Aging. He was a volunteer at Good Samaritan and an Organ Donor.

Bill enjoyed spending time with his wife, children, and grandchildren. He liked fishing, feeding the birds, going for car rides, playing euchre and card games and sharing lunch and dinners with the families. Each of his children, grandchildren and great grandchildren were his "favorite". Bill was a Hawkeye and Notre Dame, Georgia, Yankee and Cub fan.

Bill is survived by his wife Patricia (Wolfe) Reagan and brother-in-law Jack Coxe, Sebring, Florida. And many nieces and nephews and friends.

Memorials may be made to the Arc of Southeast Iowa, for the Bill M. Reagan Scholarship Fund, 2620 Muscatine Avenue, Iowa City, IA 52240 or St. Alphonsus Church, Davenport, Iowa.

Published by Quad-City Times on Sep. 22, 2021.
To plant trees in memory, please visit the Sympathy Store.
MEMORIAL EVENTS
Sep
24
Visitation
4:00p.m. - 6:00p.m.
Halligan McCabe DeVries Funeral Home
614 Main Street, Davenport, IA
Sep
24
Rosary
6:00p.m.
Halligan McCabe DeVries Funeral Home
614 Main Street, Davenport, IA
Sep
25
Funeral Mass
10:00a.m.
St. Alphonsus Catholic Church
Funeral services provided by:
Halligan-McCabe-DeVries Funeral Home
MAKE A DONATION
MEMORIES & CONDOLENCES
Sponsored by Halligan-McCabe-DeVries Funeral Home.
4 Entries
I am so sorry to hear of Bill´s passing. My thoughts and prayers go out to the Reagan Family.
Mary Podhirny
September 25, 2021
Deat Pat and Family, Please accept our sincere condolences for the loss of your loved one. I remember working in the same bldg at the Davenport Schools. He was always so kind to everyone! Gloria Chavarria and Carmen. Please take care
The Chavarria Family
September 24, 2021
I wish to add my voice to all of those who counted Bill as a "REAL" FRIEND. I worked with Bill at Washington School. He was liked by the staff and loved by the boys and girls for whom he never was too busy to recognize or offer a hand. I think the words of Myra Angelo best summarizes the greatness of Bill's friendship. She states: "People will forget what you said. They may forget some of things you did. But people will never forget how your made them feel!"
Chuck Williams
September 22, 2021
Ed and Sarah ... we are saddened to see this... our prayers and thoughts are with you and all your family. Marti and Jim Campbell
Marti and Jim Campbell
September 22, 2021
Showing 1 - 4 of 4 results