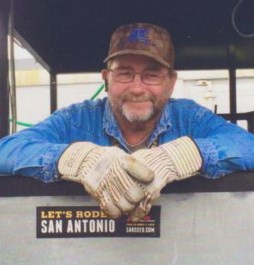 BETTENDORF-William "Bill" Arthur Whitlock, 69, of Bettendorf, IA, passed away November 17, 2021. Per his request, cremation rites will be accorded. His final resting place will be in Davenport Memorial Park Cemetery. A celebration of life will be held at a later date. Online condolences may be expressed at www.rungemortuary.com. He attended Adventure Christian Community Church.

Bill was born November 4, 1952 in San Antonio, TX. Prior to retirement in 2018, he was a dispatcher for R&L Carriers for 37 years. As a lifetime member of the San Antonio Livestock Exposition, he volunteered for the Fajita Corral Committee. A league member of NHPA, he won the TX Singles Championship in 2013. Through the years, he participated in the Weekend Four Wheeler club, mud drag races, dart and bowling leagues, and cornhole tournaments. Passions included hunting; fishing; BBQ's; dancing; gambling; and relaxing on the beach or by a bonfire. On October 6, 2007, Bill and Cynthia (Cindy) Piatt were married at their home in Adkins, TX. After retirement they traveled in their RV visiting family and friends. Adventures included trips to NASCAR races, amusement parks, historical and tourist sites. Bill was pure Texan with a heart of gold; loved and respected by everyone he met.

Published by Quad-City Times on Nov. 23, 2021.
To plant trees in memory, please visit the Sympathy Store.
MEMORIAL EVENTS
To offer your sympathy during this difficult time, you can now have memorial trees planted in a National Forest in memory of your loved one.
Funeral services provided by:
The Runge Mortuary and Crematory
MAKE A DONATION
MEMORIES & CONDOLENCES
Sponsored by The Runge Mortuary and Crematory.
0 Entries
Be the first to post a memory or condolences.