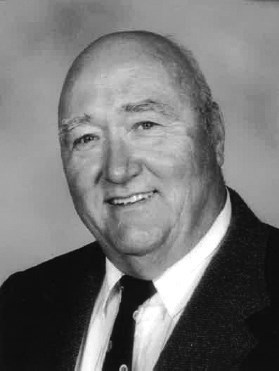 Al was a bigger than life man in so many ways. Standing 6'5' tall he was a gentle giant. Al was a jack-of-all-trades and "could fix anything." He was kind, funny, wise, and above all a family man.

His love story began June 27, 1959 when he married Joan Elizabeth Albertus. They remained happily married for nearly 62 years -- working, playing, cruising the world, and creating memories along the way. Al was so proud of the family he had created and you could always find him at the mall bragging to his early morning workout group.

Al was an offensive lineman for the Nebraska Huskers and remained a lifelong fan. He had a passion for cars that extended well beyond business and he was able to make a career out of his passion for nearly 40 years. He owned his own business, Al's Service Garage, for seven years and worked as a manager for several other auto businesses. He spent 25 years managing the Elsworth AFB Auto Hobby Shop until his retirement in 1996.

Al was an active member of the Shriner's participating in their clown division as he was always a jokester.

Al built a beautiful life alongside his wife and family. His remembrance will be a celebration of this life in the Summer of 2021, with details to be determined at a later date.

To plant trees in memory, please visit our Sympathy Store.
Published by Rapid City Journal from Feb. 26 to Feb. 27, 2021.
MEMORIAL EVENTS
No memorial events are currently scheduled.
To offer your sympathy during this difficult time, you can now have memorial trees planted in a National Forest in memory of your loved one.
Funeral services provided by:
Osheim & Schmidt Funeral Home
GUEST BOOK
6 Entries
We were always happy Al and Jo were Pete's in-laws. Our visits were always too short but always the best. We'll miss him but love the family they created.
Bobbi & Glen Clausen
March 3, 2021
Joan: I am so sorry to read that your beloved Al has passed. Al was such a kind hearted man. He was bigger than life and so was his love for you and your family. I will forever remember our friendship and our Shaklee travels together. You are in my prayers, Jan (Brown) Wasson
Jan Wasson
March 2, 2021
Sorry about Al´s passing. We lived next door to Al and Joan when they were just married in Spearfish. Remember the shiverry (?) after their wedding where Al rolled Joan down 7th Street in a wheelbarrow. Darleen and I would have been in junior high. I´m sure you enjoyed many happy years together.
Carleen Wendel
February 27, 2021
Ozzie & Bev Osheim and staff offer our sincere sympathy in the loss of your loved one.
Osheim & Schmidt Funeral Home
February 27, 2021
Joan, Im so sorry that you have lost the love of your life. I am so thankful that you got to spend time with him...just what you both of you have always wanted..To be together. Gentle hugs from Sturgis
Pierrette Lyons
February 26, 2021
Extending my deepest sympathy to Al's family and to every one of us touched by his abiding fellowship ... fond memories of Al and his mother when they lived neighbors to us on University Avenue in Spearfish.
Donna Anderson Green
February 26, 2021