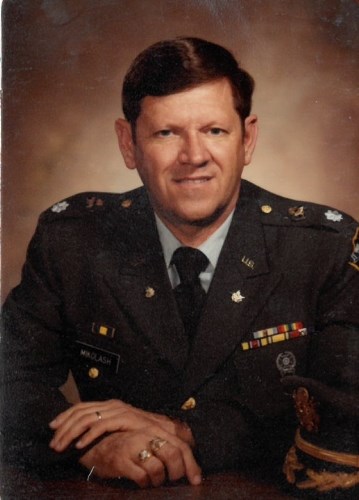 Dale was born on Sept. 23, 1935, in Tyndall to John and Helen (Page) Mikolash. He was educated in Hot Springs and Arvada, WY, and graduated from Rapid City Central High School in 1953.

His work history was spent entirely with the SD Army National Guard at Camp Rapid from August 1954 until he retired in September 1990, with over 37-1/2 years full time. Dale retired at the rank of LTC with 11 years and nine months in grade, making him the senior ranking in grade LTC not only in South Dakota, but the entire U.S. military.

As per his request, final disposition will be cremation. No services are scheduled.

Arrangements are being handled by Osheim & Schmidt Funeral Home.

To plant trees in memory, please visit our Sympathy Store.
Published by Rapid City Journal on Jan. 9, 2021.
MEMORIAL EVENTS
No memorial events are currently scheduled.
To offer your sympathy during this difficult time, you can now have memorial trees planted in a National Forest in memory of your loved one.
Funeral services provided by:
Osheim & Schmidt Funeral Home
GUEST BOOK
3 Entries
Sorry to here Jim, Prayers to the Family.
Dennis Torres
January 18, 2021
So sorry for your loss. Our thoughts and prayers are with all.
Steve & Cheryl Keller
January 11, 2021
Ozzie & Bev Osheim and staff offer our sincere sympathy in the loss of your loved one.
Osheim & Schmidt Funeral Home
January 9, 2021