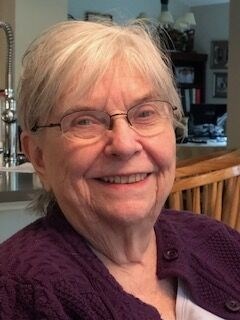 CONCORD, Calif. | Eleanor Johnson Coddington died in her sleep on Friday, Feb. 19, 2021, surrounded by her family, after fighting glioblastoma, a terminal brain cancer, for the past year.

She was born in 1936 at about eleven o'clock one summer morning in Sturgis, South Dakota, to Clarence Irving Johnson and Marion Harvey Johnson.

Her parents took her home to their cattle ranch in the Bear Butte Valley, 13 miles east of Sturgis on Highway 34. She grew up there with her older sisters, Virginia and Gail, and attended a one-room schoolhouse a quarter mile from her home. She was active in 4-H and she helped out around the ranch, including driving a team of horses and mowing hay. After eighth grade, she went to high school in Sturgis where she made lifelong friends with whom she regularly met for a yearly retreat.

Eleanor then attended South Dakota State University from which she received a B.S. in Home Economics Education. From the 1970's on, she hung her diploma over the washing machine.

In 1956, Eleanor met her future husband, Dick, at SDSU. He had returned to finish college after two years in the Navy. Dick and his future brother-in-law Duane Sudman asked the Johnson girls out to an Augustana/SDSU football game. Dad impressed Mom with his Hobo Day beard. They married a year and a half later and recently celebrated their 63rd anniversary.

As her children grew older, Eleanor began substitute teaching, which she did for many years. In her 40's, she studied family counseling and volunteered at a low-cost community counseling service. At 50, she got her Reading Specialist Credential and took a class in computer science so she could understand when her son told her about what he did at work. At 60, she took a two-year study program in Quantum Energetics, a New Age healing practice that included one heck of a lot of physiology. She always kept learning and reading.

Eleanor was perhaps best defined by her spiritual life and her devotion to her family. She and Dick always attended church in the many places they lived, worshiping and learning with many denominations over the years. In 1975, they joined Concordia Lutheran Church in Concord, CA and this was their church home for many years. Eleanor also began to study hands-on healing during these years, and discovered she had a gift of the spirit for healing. She took no credit for this, maintaining that it was the Holy Spirit at work with her as conduit. Many people benefited from her healing gift over the years, and this was the work in which she took the most joy.

Nothing was more important to Eleanor than her family. She had a deep bond with her father, Clarence, and she always loved and admired his sister, her aunt, Marion Johnson Middlebrook. She loved her mother and her sisters deeply, and had many cousins in and around Sturgis, which made visits there full of activity and love.

Eleanor was an amazing wife to Dick and mother to Lynn, Jan, John and Sarah. Again, her dedication to continued learning made her a better mom the older she got. She encouraged her daughters to have experiences that made her nervous, like taking road trips when they were teens so they would be confident young women. Her kids remained close to her and Dick throughout her life and have lost one of their best friends.

For the past 16 years, Eleanor took delight in her four grandchildren, Nora, Mariana and Ricky Coddington, and Analise Turner. She lived next door to John's kids in Austin, Texas during the winters, and in the same house with Analise when she was in California for the summers.

Services will be delayed until it's safe to gather. Please wear a mask, socially distance and wash your hands often. Donations can be made online at www.hospiceeastbay.org

To plant trees in memory, please visit our Sympathy Store.
Published by Rapid City Journal on Feb. 27, 2021.
MEMORIAL EVENTS
No memorial events are currently scheduled.
To offer your sympathy during this difficult time, you can now have memorial trees planted in a National Forest in memory of your loved one.
GUEST BOOK
1 Entry
My sincere sympathy to the family of Eleanor. Growing up in the rural Sturgis South Dakota area, I soon became acquainted with the "kids" of the "Gang." The Gang consisted of a group of men who had gone to high school together; among them were Clarence Johnson and my Dad, LeRoy Thompson. Some of my fondest memories were gatherings of The Gang. I especially enjoyed picnics at the Johnson home, because they had a wonderfully big, green yard for playing games. Growing up, the Johnson girls were older than I and I idolized all they could do. I was especially impressed by how they drove tractors and helped their Dad hay in the summer. And, I was also impressed by the beautiful tans they got doing that! Yes, I can see why Eleanor appreciated Marion Middlebrook. She was our County Superintendent of Schools and, even when I was young, I thought of her as a very able person. I am so pleased to hear of Eleanor's continued learning, her devotion to her family, and her involvement in a healing ministry. Certainly you were blessed to be part of her family. Know that I share in your sense of loss.
Nancy Thompson Harlan
February 28, 2021