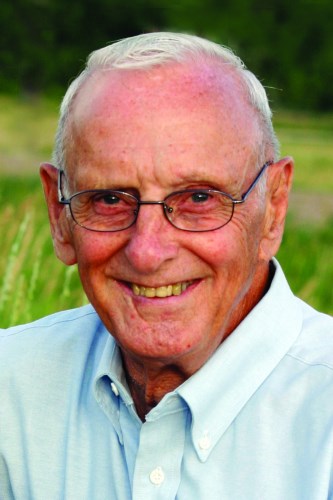 RAPID CITY | Gordon Wicks, 94, passed away peacefully in his sleep at Fountain Springs Health Care on Saturday, Sept. 11, 2021. He was born at home on Jan. 9, 1927, to Harvey and Goldie Wicks on a farm northeast of Carpenter, S.D. He was the fourth of seven children.

In 1945, at the age of 18, Gordon joined the U.S. Army and was stationed in the Aleutian Islands. After two years he returned to the farm. In 2010, he went on the Honor Flight with other WWII veterans, which was a highlight in his life.

Gordon met the love of his life, Betty Jane Neu, in 1951 at a dance in Carpenter. The two courted primarily through letter-writing while Betty was a nursing student at Sioux Valley Hospital in Sioux Falls and Gordon was working on farms around Carpenter. They were married at West Bethany Church in Erwin, S.D., on June 1, 1952. Gordon never stopped declaring himself to be the luckiest man in the world for having found her. They had four children, all raised in Rapid City.

For 17 years Gordon worked for Chicago Northwestern Railroad. He spent the next 21 years working for Black Hills Packing Company.

Gordon Wicks was a dreamer who refused to live an ordinary life. He had dreams of being a baseball player, a boxer, a musician, a writer, a poet, a politician, and an oil and water douser, and he realized those dreams in small ways throughout his life.

Gordon followed his passion, dousing for water and oil. Learning of his success, people would often call him to find water on their land.

Gordon became an avid runner and walker, even setting speed walking records for Senior Olympics. He coached Little League baseball, taught neighborhood kids how to box to protect themselves from bullies, and worked with kids and grandkids to help them become better athletes.

Golfing was one of Gordon's passions, and his golfing buddies will attest that even after the age of 90, Gordon was an admirable competitor. The term "Wicksing it" was coined when he would putt rather than chip from the fairway, sinking many a long shot. He was proud to have hit two hole-in-ones in his 80s.

Gordon loved to read and write and keep up with the world around him. He wrote poetry that he shared with family and friends. A woman once stopped him to thank him for saving her life after he shared a poem he wrote about the dangers of alcohol abuse.

He played piano and guitar and sang for friends and family and to his kids nearly every night before bed. For years the highlight of his week was to play and sing with bluegrass musicians who gathered at Rockerville. In 2006, for Gordon's 80th birthday, his family helped him to produce an album of original music featuring songs about his life in the 1930s and other folk songs that had been sung to him as a child.

Gordon didn't become a politician, but he kept up on politics both historical and current and could argue over coffee with the best of them. People calling his house might well hear him answer the phone with a hearty "Senator Wicks."

If he wasn't there to answer the phone, the caller might hear a voice mail message that started with his energetic singing of "Oh what a beautiful morning..."

Gordon was a jokester and always had a story to tell. He said his day was a success if he could make at least one person laugh.

He and Betty were charter members of Atonement Lutheran Church, a congregation that became a second family. He loved his family, friends and little children with his whole heart. His laugh was contagious, his humor uplifting, his love, hugs and kisses genuine. He will be forever missed by all who knew and loved him.

Gordon's heart broke when he and Betty lost their daughter Denise Lammers in 2015. Other losses include his parents, Harvey and Goldie Wicks; brothers Kenneth (Nonie) Wicks and Roland Wicks; sister Phyllis Lathrop; and great-grandson Coen Kenner.

Services will be held at 11 a.m. Saturday, Oct. 16, at Atonement Lutheran Church.

A graveside service will be held at 2:30 p.m., Friday, Oct. 15, at the Black Hills National Cemetery.

In lieu of flowers, the family requests memorials to Atonement Lutheran Church.

Published by Rapid City Journal from Sep. 14 to Sep. 18, 2021.
To plant trees in memory, please visit the Sympathy Store.
MEMORIAL EVENTS
Oct
15
Graveside service
2:30p.m.
Black Hills National Cemetery
SD
Oct
16
Service
11:00a.m.
Atonement Lutheran Church
SD
Funeral services provided by:
Osheim & Schmidt Funeral Home
MAKE A DONATION
MEMORIES & CONDOLENCES
Sponsored by Osheim & Schmidt Funeral Home.
12 Entries
Dave and Renee, I remember Gordon so very well even though we were all so young, he had a huge impact on everyone. I am sorry for your loss as it is never easy when a loved one goes on before us. My family lived across the street on E. Waterloo from you and the memories are great ones. Hope you and Dave are doing great. I live in FL now, prayers of comfort for your family. God Bless, Chris Johnson
Chris Johnson
Friend
September 23, 2021
We are so very sorry for your loss. You are in our thoughts and prayers.
Rod Gilbertson Family
September 20, 2021
Kay and I are so very sorry to learn of your loss. Senator Wicks was always a favorite of mine. Loved his sense of humor, his love of life and the love he had for his family and friends. Our sincere condolences to the entire family. Joe and Kay Tennyson
Joe Tennyson
Family
September 18, 2021
Ozzie & Bev Osheim and staff offer our sincere sympathy in the loss of your loved one.
Osheim & Schmidt Funeral Home
September 18, 2021
I was so sad to hear of Gordons passing He always had a smile and a happy twinkle in his eye, Betty you are always remembered iin my recollection of family times . God Bless you all.
Carol Jean [Larson] Heatherly
September 17, 2021
No more white hankies....a great memory for me. He enjoyed buggin' me.......no more catfish bate on the screen door handle......stuff that keeps a kid on the straight and narrow....much learned from this man......thanks Gordon!!!!!
Ron Davis
Friend
September 17, 2021
I almost work with him 20 yrs. Very good friend. He will be missed.
John Oien
Work
September 16, 2021
Renae and Dave I am so sorry for your loss. I worked with Gordon in the 70's and even then he was quite a character and fun to be around.
Vince Hager
Work
September 14, 2021
Uncle Gordon, a legend in our family, will be forever remembered with so much love, laughter and joy. Larger than life, he is a light in our lives that will always burn bright. Aunt Betty, your grace, strength and love is his constant; he told all of us every time he saw us how grateful he was for you; how what he was most proud of in his life was your marriage. Bless his beautiful soul infinity to infinity and the forever bond of love he shares so generously with us all.
LISA WICKS
Family
September 14, 2021
My deepest sympathy to all of you. Gordon always brought a smile to everyone with his good nature. God's blessings to you all.
Beverly Lea Schaeffer
Friend
September 14, 2021
I am so sorry to hear about Gorden , I will miss his good humor, jokes and songs. You will be in my prayers. Curt Nupen and family
curtis nupen
Friend
September 14, 2021
So sorry for your loss. Everyone loved Gordon. He will be missed. Betty you are in our thoughts and prayers.
Corinne Barnhardt
September 14, 2021
Showing 1 - 12 of 12 results