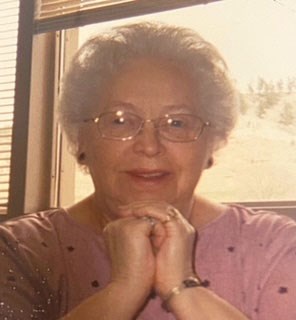 SPEARFISH | Helen June Dietrich, 89, went peacefully to the Lord on Thursday, Nov. 12, 2020. She was born on May 29, 1931 in Rapid City to Roswell and Francis Reel. She loved her black jelly beans and her three sisters, Carol Rae, Avis Ann, and Vicki Marie. She also loved her baby brother, Buzzy. Although his life on earth was short, he was forever in her heart.

Helen met her true love and soul mate, Al Lipp, and they were married on Feb. 14, 1948 when she was just 16 years old. Helen and Al made their home in Lead, where Al spent many years at the Homestake Gold Mine and Helen was the most devoted mother to their three children: Cheryl Lynn, Johnnie Dean, and Lori Lee.

Upon losing Al at a young age, Helen put both feet on the ground and began making a life for herself. She found a job she loved and great friends at the Elks Lodge of Deadwood. It was there that Helen found love again. She married Marvin Dietrich on Sept. 14, 1974 and they spent many years riding motorcycles, driving jeeps, building gardens and homes, and loving five granddaughters and one grandson.

During this time, Helen played an essential role in the raising of three of her grandchildren, Jennifer, Krissi, and Johnnie. She cooked meals, washed clothes, made beds, picked up toys (that they put under the bed) and made sure that the school work was finished. When they no longer needed her physical presence, she became the Head Housekeeper for the Deadwood Gulch Resort. These kiddos missed their grandma so much that they joined her staff and they were all proud of the cleanest rooms in town.

Helen's child caring days came back around in 2000 when the "light of her life", Tyler Michael, was born. She spent several years letting him eat food on her furniture, drive cars on her coffee table, and pretty much doing anything he wanted. He was her "Ty Man" and she couldn't go anywhere without pictures to share and telling everyone about him. We recently learned that her caregivers put her glasses by his picture every night so he could protect them.

Marvin passed away in 2002 and Helen relocated to Spearfish where she resided until her passing. She made many new friends, reconnected with old friends, and considered her caregivers at Spearfish Canyon Healthcare part of her family.

Helen was proceeded in death by her parents; her husbands, Al and Marvin; her sisters, Carol and Vicki; her brother, Buzzy; and her son, John.

Those left on earth to cherish Helen's memory are her daughters, Cheryl of Spearfish and Lori of Crestview, FL; her sister, Avis (Warren) Felter of Lead; and several nieces and nephews. She will be greatly missed by her grandchildren and great-grandchildren: Jennifer, Josh, and Tyler McBurnett, Spearfish; Krissi, Mike, Lucas, and Kennedi Hannahs, Crestview, FL; Johnnie, Carrie, and Keegan Sack, Sioux Falls; Wendy Addington, Spearfish. She loved them first, but they loved her last!

In lieu of flowers, donations can be made to Spearfish Canyon Healthcare Activities Department or her great-grandchildren's education. Helen enjoyed pie day, root beer floats, fancy nails, and balloon bop.

A private family service will be held on Monday, Nov. 23, at Fidler-Isburg Funeral Chapel. Helen will be laid to rest at Black Hills National Cemetery near Sturgis.

Online condolences may be written at fidler-isburgfuneralchapels.com

To plant trees in memory, please visit our Sympathy Store.
Published by Rapid City Journal on Nov. 18, 2020.
MEMORIAL EVENTS
Nov
23
Service
Fidler-Isburg Funeral Chapel - Spearfish
450 7th St - P.O. Box 487, Spearfish, SD 57783
Funeral services provided by:
Fidler-Isburg Funeral Chapel - Spearfish
GUEST BOOK
1 Entry
Cheryl and Lori, I am sorry for your loss. I have fond memories of your Mother. My thoughts and prayers are going to you and the rest of the family.
Alvin Williams
November 18, 2020