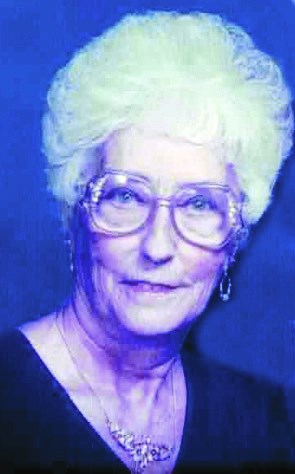 Margie was born Dec. 21, 1925, on a farm near Colome, SD. She was preceded in death by her parents, Earl Raymond Harvey and Ruby Clara (Johnson) Harvey; as well as her sisters, Jean Harvey and Earleen Harvey; brother, Edward Harvey; and two daughters, Linda Harrington and Beverly Ridenour.

Margie attended a country school for eight years before attending Colome High School, where she played trombone in the school band.

Margie grew up on the family farm, where a great work ethic was instilled in her that served her well her entire life. She also played the piano, along with the trombone in her family band, who often played for barn dances in and around the Colome and Winner area. She could liven up any gathering and get people dancing with her Polka version of "Roll Out the Barrel" when she played the piano.

In 1943, she left the farm and moved to Winner, where she worked as a waitress at the Peacock Cafe. In 1945, she moved to Rapid City and worked at several jobs including as a cab driver and on the production line at the Black Hills Meat Packing Plant. From firsthand experience she always said, "you don't really want to see how sausages are made."

In 1947, she moved to Portland, OR, to join the love of her life, Tom Ridenour, whom she married on April 28, 1947. Margie and Tom had their first child, Linda, in Portland. While in Portland Margie worked in an apple processing plant and Tom worked in the naval ship yards. Margie said it just rained too "damn" much in Portland, so after a short time they moved back to Rapid City...this time to stay.

In Rapid City, Margie and Tom started a successful house painting and drywall company. In 1953 they started a rental housing business that Margie owned until 2020. In addition, she had two more children, Beverly and Chester. As if the painting and rental housing business weren't enough, Margie ran a day care out of her home for many years, taking care of as many as 10-15 children at a time by herself in addition to her children. There was never a dull moment in Margie's house.

Over the years Margie helped facilitate many private adoptions that brought a lot of joy to many young families. She also brought lots of joy with her animal pancakes that she made for her grandkids. It was well known that the alligators and lions never had a chance if there was syrup and a fork nearby. Margie loved to go dancing with Tom every Saturday night. The two of them were regulars at local places like the Moose Lodge and the VFW Club.

Margie will be greatly missed by her family and friends.

Due to COVID-19 safety concerns, memorial services were delayed until now.

Memorial services will be held at 10 a.m. on Saturday, July 24, 2021 at Kirk Funeral Home. Following the service, there will be a graveside service for the inurnment of Linda Harrington (Margie's daughter) at Mountain View Cemetery (far north end of cemetery) at approximately 11 a.m. A reception will be held from noon to 2 p.m. at the Moose Lodge (please use the south parking and entrance).