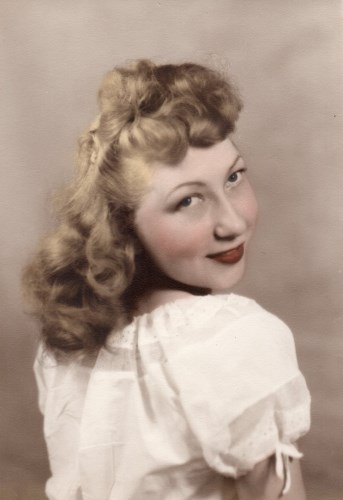 Margaret was born on a farm near Owatonna, MN, on June 10, 1928 to Joseph and Mary (Renchin) Srsen. Margaret had an older brother Rudy and an older sister Mary. Margaret was the youngest member of the family and still laughed about being known as the baby of the family to this day. She was raised through grade school on a small farm where her family raised cows and chickens, among many other animals. Growing up on the farm at that time meant going without simple things we take for granted today, including running water and electricity. But, since they raised their own livestock, she remembers they always ate well despite living through the Great Depression. She also remembers climbing up to the loft of the barn in the winter, so she could ski down the snow banks on her brother's homemade skis. Another fond memory was when her parents bought a piano from a traveling salesman. Her father played the violin and she started playing the piano at eight years old.

About the time Margaret was ready to go to high school, her father got a job in Owatonna and moved the family to town. After school she worked at an insurance agency and another job was colorizing black and white portrait photographs. After serving in WWII, her future husband, Rudolph Schelske got a job at the MariGold Dairy in Owatonna. They met at the Monterey Ballroom where they loved to dance. On May 27, 1948 they were married at the Little Brown Church in the Vale, in Nashua, Iowa. They moved to Redfield, SD and raised three children including Gary Schelske of Redfield, Karen Stuard of Laurel, MT, and the baby of the family – Steven Schelske of Rapid City. They moved to Rapid City in 1971, where she had lived ever since.

Margaret and Rudy were together for 50 years when Rudy passed away in 1997. She had four grandchildren including Michael, Elizabeth, Sara, and Brent: four great-grandchildren including Isaac, Ellis, Louisa, and Mason. Margaret resided at Morningstar Assisted Living at the time of her death. She continued to play the organ until very recently.

Margaret's favorite hymn was "What a Friend We Have in Jesus." She used to sing this hymn with her sister Mary when they washed the dishes together.

She was preceded in death by her parents, Joseph and Mary Srsen; her husband, Rudy Schelske; brother, Rudy; and sister, Mary.

Funeral services will be at 11 a.m. on Friday, July 23, at Trinity Lutheran Church, 402 Kansas City St. Interment will follow at 2:30 p.m. at Black Hills National Cemetery near Sturgis.