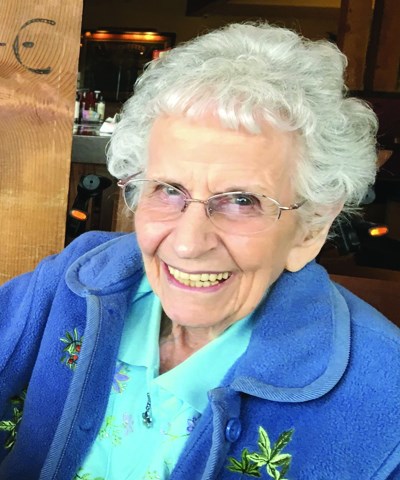 Pauline McNutt passed away September 29, 2021 at the Legacy Living and Rehabilitation Center in Gillette WY she was 95 years old.

Pauline was born on December 23, 1925, in Chadron, NE to Willis W. Pascoe and Frances C. (Boardman) Pascoe. She began school at the West Ward School and graduated from Chadron High School in 1943. On August 3, 1946, she married her high school sweetheart, Mason McNutt. They enjoyed 69 years of marriage before Mason passed away in 2016. She lived most of her life in Chadron, only moving away after her husband had passed to be closer to family.

She began work after graduating from high school for First National Bank and later worked at the former Abbott Bank of Chadron. When she and her husband purchased Metal Products Co. in 1961, she worked as the bookkeeper for the family business until her retirement.

She was a long-time member of Immanuel Lutheran Church and especially enjoyed taking her turn preparing the alter for Sunday services. As a personal church project, she sent birthday cards to each of the residents of the Martin Luther Home in Beatrice, Nebraska after hearing back from a care giver about how much the birthday greetings meant to the residents. Pauline enjoyed camping and spending time at their trailer near Chadron State Park, gardening, reading, knitting, and spending time with her grandchildren.

She was preceded in death by her parents, two sisters, Helen, and Charlotte and by her husband Mason McNutt.

She leaves many loving memories to be cherished by her family and those who knew her.

Published by Rapid City Journal on Oct. 13, 2021.
To plant trees in memory, please visit the Sympathy Store.
MEMORIAL EVENTS
To offer your sympathy during this difficult time, you can now have memorial trees planted in a National Forest in memory of your loved one.
Funeral services provided by:
Chamberlain Chapel
MAKE A DONATION
MEMORIES & CONDOLENCES
Sponsored by Chamberlain Chapel.
0 Entries
Be the first to post a memory or condolences.