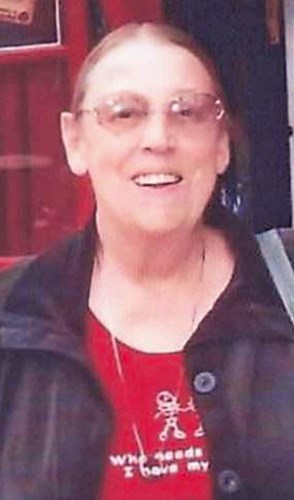 Shirley was born on Sept. 8, 1946 in Moline, IL to Charles W. and Eleanor R. (Brown) Slater. She joined her big sister, Lorna. The family moved to California about 1950, and then to Sturgis in 1953, where she entered second grade. She graduated from Sturgis High School in 1964.

She had the fantastic luck to meet Dave Wall in her senior year of high school, and they wed on Nov. 21, 1964, becoming life partners. They lived for a short time in Lead and Deadwood, and then struck out to see the world, starting in Coeur d'Alene, ID. They followed the Oregon coast to Albany for a year or so, and then back north to Spokane, WA. In 1968, the couple returned to Sturgis, where Dave opened a mechanics shop, Dave's Auto Repair. Shirley worked with him at the shop doing bookwork and running parts. She also helped with the grunt work and had a real "talent" for cleaning valves, washing trannies, and scraping gaskets. She worked part-time at the Sooper Dooper Market from 1971-1973, in addition to her time at Dave's Auto. During these years she also became a Girl Scout Leader with sidekick, Bonnie Alberts, even travelling with the troop to Denver, Girl Scout National Center West, and Yellowstone National Park.

In 1973, Shirley embarked on her career as the NAPA lady. In a time when relatively few women worked in the auto parts business, she went to work for Don and Mary Tech at Key City Auto as a full-time counterman. She enjoyed the challenge of winning the acceptance of the ranchers and farmers that were a big part of the customer base. From 1973 to 1984, she worked for Don. Then Dave made the big decision to close the shop operations and to take a job in Wyoming, so in May 1985, she followed him, becoming the manager at Policky Enterprises, a brand-new NAPA store in Wright, WY. She stayed with the new owners, Chuck and Rhonda Johnson, when they purchased the store in 1990, renaming it as Wright Auto Parts. Shirley retired from the Wright store in May 2013, having spent a total of 40 years working in the NAPA parts system. Over those years, satisfied customers often referred to her as the best parts person around.

Shirley and her sister, Lorna, developed a taste for travel together in their middle years. They took tours that included the East Coast, Europe, the British Isles, Italy, Texas, and a favorite, the train trip across Canada. These trips were occasions for Shirley and Lorna to share quality sister time and to take thousands of photographs, which were later organized in photo albums and books.

Dave and Shirley planned to retire "back home" in Sturgis, where they had always kept and maintained their house and shop during the Wyoming Years. This was the place where they vacationed every year during the Rally, and they hosted a wonderful crowd of friends who became their Rally family. They also drove over from Wright almost every weekend of those 28 years to relax, unwind, and spend time with old friends.

However, although Shirley retired, Dave was still working and wasn't ready to pack up his wrenches yet. He never got that chance, as he was lost to complications from surgery on Nov. 1, 2013.

In February 2014, Shirley followed their original plan and came "back home" to spend her retirement in the house that had brought them both comfort and stability, and where she would continue to enjoy hosting her Rally family.

She was preceded in death by her husband of 49 years, David Wall; her parents, Charles Slater and Eleanor Branson; sister-in-law, Jean Urban; niece, Sarah Graham; and nephew, Carl Leenknecht.

Visitation will be held from 5 to 7 p.m. on Sunday, Oct. 18, at Kinkade Funeral Chapel.

Funeral services will be at 2 p.m. on Monday, Oct. 19, at Kinkade Funeral Chapel. Burial will follow at Bear Butte Cemetery.

In lieu of flowers, memorial donations may be made in Shirley's name to the Sturgis Veterans Honor Guard.

Condolences may be sent to the family at kinkadefunerals.com.

To plant trees in memory, please visit our Sympathy Store.
Published by Rapid City Journal on Oct. 17, 2020.
MEMORIAL EVENTS
Oct
18
Visitation
5:00p.m. - 7:00p.m.
Kinkade Funeral Chapel
1235 Junction Ave, Sturgis, SD 57785
Oct
19
Funeral service
2:00p.m.
Kinkade Funeral Chapel
1235 Junction Ave, Sturgis, SD 57785
Funeral services provided by:
Kinkade Funeral Chapel
GUEST BOOK
4 Entries
I am really going to miss our conversations at exercise! Great lady and none smarter! From your old Pine Street neighbor.
Marshall and Sharon Williams
October 20, 2020
To whom it may concern, Dave & Shirley were great people. I met them both in 1979. It breaks my heart to hear of her passing. I used to be a regular rally visitor although my age also has slowed me down and hadn't attended lately. I hope they both find peace together in rest. RIP
Robert Mercado
October 20, 2020
I remember all of those Girl Scout camping trips with you and Bonnie. They have always been special memories for me.Thank you! Rest In Peace.
Peggy Nesd
October 18, 2020
Bless You Shirley !! Will miss you and our conversations about everything ...but am happy no more suffering on this earth and you and Dave can be together in a better place.
Connie
October 17, 2020