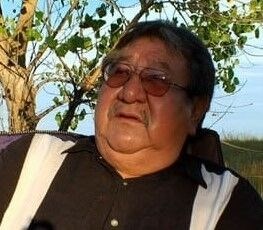 Steve spent much of his lifetime in service to the Oglala Sioux Tribe. He served as a patrol officer and then as Lieutenant of Police with the Bureau of Indian Affairs Tribal Police in the Wounded Knee District. He then moved on to serve as the Tribe's Prosecutor and to multiple appointments to the Tribe's Judiciary. He sat in the governing circle of the Tribe during the Iron Cloud Administration. He was involved in local and Reservation-wide politics. He was active in his Church and completed the four-year Lay Ministry Formation class to help the effort to lay a stronger foundation for the Lakota Catholic Church on the Pine Ridge Reservation.

Steve is survived by his wife, Pru; his children, Nichelle, Dalene, Cristy, Stefany and Sean; his brother, Lambert Hawk (Mary); brother-in-law, Darold Forney; and his Grandchildren who he loved dearly. He was preceded in death by his first wife, Eileen (Stover) Hawk and son, Steve Jr.

Private family services are planned. His burial and Celebration of his Life will be held at a later date.

Memorials in Steve's honor may be made to Our Lady of the Sioux Catholic Church, PO Box 104, Oglala, South Dakota 57764, or your preferred charity.

To plant trees in memory, please visit our Sympathy Store.
Published by Rapid City Journal on Nov. 14, 2020.
MEMORIAL EVENTS
No memorial events are currently scheduled.
To offer your sympathy during this difficult time, you can now have memorial trees planted in a National Forest in memory of your loved one.
GUEST BOOK
4 Entries
Who's gonna fill his shoes
Joseph White Bear Claws
November 24, 2020
Pru and family. I am so sorry for your loss. Thoughts and prayers for all.
Lisa Cummings.
November 15, 2020
Pru, Forrest, and Family of Mr. Hawk; I am so sorry for the loss of your husband, father, and grandfather. You are all in my thoughts and prayers as you remember and celebrate Steve's life. I'll bet he had many stories about his experiences throughout his days. Love to you all, Linda S.
Linda Seger
November 14, 2020
Pru and family, my prayers are with you, so sad to see this. Simsalabim.... I don't remember WHY Steve and I started saying that to each other, but out of the blue I said it last week...
Wanda O'Rourke
November 14, 2020