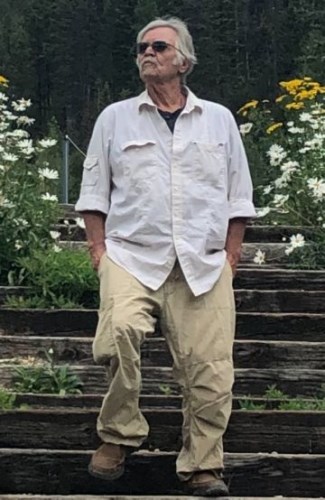 HAMILTON - Bruce Allen Brown, born March 9, 1953, in Glasgow, Montana spent most of his life in Montana. He was the third child of a total of seven children his parents, Harry and Virginia, had.

Bruce's mom and dad and his two brothers, Steve and Tim, were there to greet him when he passed. Left behind are his sisters, Judy, Gloria, and Gigi; and his brother, Jack. He also leaves behind his children, Bruce Jr., Brooke, and Barbie; a granddaughter, Chloe; his dog, named Doc; and a handful of really great friends!

As a child, he spent his days causing havoc, usually on horseback. He joined the Navy at eighteen years old, and waited patiently for the care packages he would receive from his dad, which always contained a mouthwash bottle full of liquor that he would share with his shipmates. After serving his country he went where the wind took him, becoming a jack of all trades - he worked the oil rigs, drove truck, painted houses, and finally found his calling of helping others make their house a home as a finish carpenter. He always took great care and pride in his woodworking, and you knew if Bruce built it, it was done right.

He married and had three children, then quickly divorced, deciding the single life suited him better. He spent a lot of his evenings down in his wood shop mastering his craft while surrounded by friends and beer. Weekends he spent riding around dusty backroads with his son on dirt bikes, or throwing fishing poles in the back of their truck and heading off for impromptu camping trips.

A thousand stories can be told about Bruce, each one funny in one way or another. He has been known to disregard all convenience store etiquette and walk behind the counter to pick out his own hot dog (even though he would never eat a hot dog) just to pretend he was senile when the clerk came running up to stop him.

The truest story of all, though, is that he simply got it right. He lived his life caring little about the things most people occupy their time on Earth with, like money and material things, and instead stocked his home full of love and lessons, lessons bigger than we realized at the time. Bruce Jr. once came home to his dirt bike missing, only to find out his dad had given it away to a family that needed it more. And every gift ever given, no matter the size or significance, was lovingly inscribed with his slanted, somewhat jerky penmanship, extending these lessons to us even now after he has gone.

He was asked, as his time with us was fading, what his greatest memory of all was. He took only a moment to answer, as if he had been waiting to be asked, and said just one word, "Chloe". This did not surprise any of us, if you have had a conversation with him at any point since his granddaughter was born you know that she was the greatest love of his. When he found out he was going to be a "granpa", which he insisted was the correct spelling of his new title, he knew things were about to get really good. And really good they were. There is a magic between him and Chloe that will remain unrivaled, no matter where Bruce is.

You never really could tell if what he was saying was true, or if he was pulling your leg (did you all know that mice can miraculously turn gelatinous and travel through electric sockets? No, really, he told me so). So, for this reason, we will leave the story of how the toughest man we know passed away on April 16, 2021, up to your wildest imaginations (but make it a good one!). One legend claims he took a drive up Lost Horse and simply caught a ride on the wind. Some even say, when the air shifts just right, you can still smell the scent of his burning Backwoods cigar on the breeze.

Graveside services with Military Honors will be held Thursday, June 24, 2021 at 11:00 am at the Western Montana State Veterans Cemetery in Missoula. Condolences may be left for the family at www.dalyleachchapel.com.

To plant trees in memory, please visit our Sympathy Store.
Published by Ravalli Republic on Jun. 18, 2021.
MEMORIAL EVENTS
Jun
24
Graveside service
11:00a.m.
Western Montana State Veterans Cemetery
, Missoula, MT
Funeral services provided by:
Daly-Leach Memorial Chapel
MAKE A DONATION
MEMORIES & CONDOLENCES
Sponsored by Daly-Leach Memorial Chapel.
3 Entries
I was thinking about you the other day, thinking of calling you. You were certainly one of a kind. Rest easy, my friend.
Cindy Kagan
Friend
July 26, 2021
Unbelievable, so very sorry for all his love ones. NEVER past tense!
Berney T Opheim
Friend
June 18, 2021
Rest in peace Bruce. You'll be missed by many.
Donald Traynor
Family
June 18, 2021
Showing 1 - 3 of 3 results