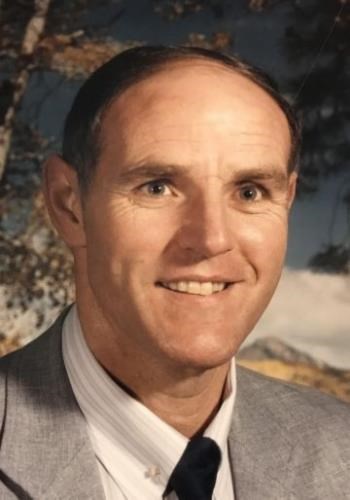 Dennis Dwight Kimzey, 77, of Hamilton, Montana, died September 16, 2021, at home with his faithful wife of 53 years by his side after a long and inspirational battle with Parkinson's Disease.

He was born to the late Dwight "Doc" and Orla Kimzey on September 29, 1943 in Spokane, Washington, and grew up in Columbia Falls, Montana. He was a proud graduate of the Columbia Falls High School Class of 1962. Dennis, the third of four children, was an accomplished trumpet player in high school and college as well as an all-state football and track athlete. He played in the 1962 Montana Shriners all-star football game as a 300 pound lineman. Shortly afterward, he was a much leaner sprinter and javelin thrower at Lewis Clark State College in Lewiston, Idaho, where he holds the (now-retired) school record for the javelin throw.

While at LC State, he met Sylvia Law of St. Maries, Idaho and they married and moved to Toutle, Washington for his first teaching and coaching job. Dennis's life's passion of teaching and leadership in education spanned four decades. He was a history teacher in Toutle, Washington, Coeur d'Alene and St. Maries, Idaho before becoming a principal and superintendent. In 1976, Dennis returned to his hometown to be the junior high principal and was named the superintendent of the Columbia Falls School District in 1982, twenty years after graduating from it. In 1986, Dennis became the superintendent and principal of Beaverhead County High School in Dillon. After a lengthy stay in Dillon, he moved to the Bitterroot Valley, where he was the superintendent of Stevensville Public Schools, followed by heading the Lone Rock school district until finally retiring in 2010. He was active in the leadership of all Montana schools through his service on the board of the School Administrators of Montana and in 1994 he was recognized as Montana's Superintendent of the Year by the Montana Association of School Superintendents. His service to the communities he lived in did not stop upon retirement, and he remained active in the Mineral and Ravalli County Food Banks, mentored teaching candidates for the University of Montana and UM-Western, belonged to Chamber of Commerce, Lions and many other civic organizations until his health no longer allowed full participation. He was a proud and active member of several Presbyterian and Methodist church congregations over the years. In every town where Dennis has lived, there are hundreds of people who have received one of his thoughtful and encouraging thank you or congratulatory notes. His genuine gratefulness and appreciation of others will not soon be forgotten, nor will his indomitable spirit in the face of adversity. Not a single word of complaint was heard as his abilities slowly deteriorated during his eleven years of living with Parkinson's. Outside of his work, he enjoyed fishing, running/walking, hiking, attending high school sporting events, and hunting. There are a couple of well-trod hiking or walking trails in each community in which Dennis has lived where he walked every day, without fail, until that ability, too, was gone. In his final year, he was surrounded by family and truly enjoyed watching his great-grandson at play.

Dennis was preceded in death by his sister, Karen, his parents, Dwight and Orla Kimzey, and son-in-law Paul Meyer. He is survived by his wife, Sylvia, children Kelly, Dan (Brooke), and Kathy, grandchildren Kaitlin, Lauren, Avery, McKenna, and Cole, great-grandchild Paul, sister Orla, and brother John. The family would like to extend a special thank you to Home Health and Hospice of Montana.

In lieu of flowers, we ask that you honor Dennis's lifelong belief in service to others by making a contribution to the food bank or food pantry in your community.

Services will be held at the First Presbyterian Church in Hamilton, Montana at 11:00 a.m. on Saturday, September 25th, 2021. Memories and condolences may be shared with the family at www.brothersmortuary.com