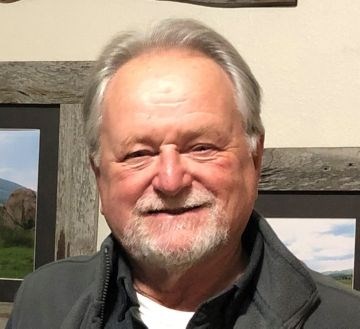 He was the youngest of three children born to Mary F. (Parini) and William P. Rebich. He grew up on a ranch south of Dillon with his two siblings. His first 6 years of school were at Blacktail School, a one room school just down the lane, then moved up to Bagley School for two years before attending Beaverhead County High School, graduating in 1961. He enlisted in the Army, and served in the Airborne division from 1961-1964, in Mainz, Germany. He was part of the 20 year reenactment of D-Day on June 6, 1964 and parachuted into Northern France. Upon returning home he attended the University of Montana-Western in Dillon from 1965-1969 graduating with a B.S. in Education. After realizing he didn't care for teaching he moved around ending up in Gillette, Wyoming as a roughneck in the oilfield where he met Kathleen S. (Wirgau) Mitchell and her 4-year-old daughter, Amy. They married on October 11, 1973 (during hunting season!). Their little family made their home in Gillette and welcomed a son, Ross, in 1976.

Gene, a skilled welder supported his family by working for an independent contractor and then for Jacobs Ranch Mine for 28 years before retiring in 2004. Always eager to try his hand at new things, in 1979 they built a home in Gillette (which never saw a repairman as he was able to fix and repair everything!) and lived there until Gene retired. While he may have retired as a welder he didn't sit back and do nothing, he worked to fulfill his life-long ambition of returning "home" to Montana. He purchased property in Hamilton, MT and built his retirement home. Not one to be idle Gene also rebuilt his old 1970 Pontiac and remodeled his brother's house in Dillon. Gene and Kathy loved to travel, visiting Alaska, Europe, Wales, New Zealand, and Australia before they were content. They also took several mission trips with Grace Lutheran Church to repair storm damaged homes in Mississippi, Kansas, and North Dakota.

His last ten years of retirement brought him back to his roots after the Parini family's homestead ranch came into his possession. Gene immediately began to repair the long neglected 1928 log home and buildings around the property in Elk Park, MT. Whether it was the new roof, repairing the barns, fixing fences or building new bridges across the creek, Gene loved returning the old homestead property to its former glory with the help of his son, grandchildren, and brother, finishing the remodel last year.

He is preceded in death by his parents and his older sister, Louise. He is survived by his wife of 47 years Kathy, one brother Bill, of Dillon, MT; step-daughter, Amy, of Boise, ID; son Ross, favorite daughter-in-law Molly and grandchildren Tynan, Greyden, and Maryn of Kennewick, WA. Brothers Mortuary and Crematory are honored to care for the family. Memories and condolences may be shared with the family at www.brothersmortuary.com

To plant trees in memory, please visit our Sympathy Store.
Published by Ravalli Republic on Jul. 9, 2021.
MEMORIAL EVENTS
No memorial events are currently scheduled.
To offer your sympathy during this difficult time, you can now have memorial trees planted in a National Forest in memory of your loved one.
Funeral services provided by:
Brothers Mortuary & Crematory - Hamilton
MAKE A DONATION
MEMORIES & CONDOLENCES
Sponsored by Brothers Mortuary & Crematory - Hamilton.
1 Entry
In the short time we knew Gene as our Elk Park neighbor, we had many laughs. Gene was a wonderful man with a heart of gold, rest easy Gene, your time here is done and you will be missed. Condolences to his family
Tammy & Larry
Other
July 9, 2021
Showing 1 - 1 of 1 results