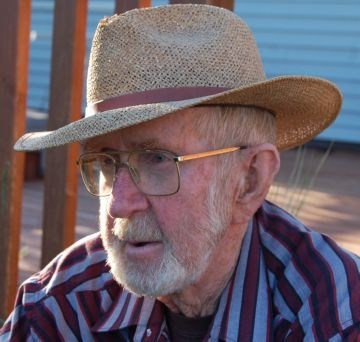 Born April 11, 1926 the youngest child of John H and Cora Jarvis Hayes, he was born and raised on the current site of the "Never Sweat Ranch" in Montana's Bitterroot Valley. He attended grade school in Charlos Heights and high school in Culbertson, Montana, excelling in football, basketball, band, chorus, drama, and student government. At age 17 he became a Cadet and entered the Army. He served in the Army Air Corp's 125th Squadron as a radio operator of a flight crew on C-47's at the end of World War II. He spoke fondly of the time he spent in India, helping train the Indian Air Force. He said -with that John Hayes' twinkle in his eye, "They never DID give me the medal for good behavior," but he was named an "Honorary Member of the Indian Air Force". Honorably discharged from military service on October 18, 1946,

Hayes returned and made his home in Darby, Montana. He trapped martin and hunted mountain lions with his hounds. He worked as a packer for the US Forest Service, and later retired from the Conner/Stultz Lumber Company south of Darby where he was a laternal operator in the log yard. He was a "write-in" on the ballot, was elected, and served a term as Chairman of the Darby School Board, and President of the Credit Union. He has shod hundreds of head of horses and mules up and down the Bitterroot Valley. Reloading ammunition and competitive benchrest shooting played a big part in his life during retirement, and he enjoyed traveling and competing with his circle of friends.

Hayes was a very active hunter, fisherman, and gardener. Late in life, he enjoyed canning, baking pies - using fruits he had raised; got in a daily workout; and in his spare time, built canes and walking sticks from diamond willow he had collected during his Alaska fishing trips. Many of those canes and walking sticks were donated to help raise money for good causes.

His FAMILY was his pride and Joy!

Daughter Patty (Harry) May of Lovell Valley, and her family: Cheri (Jason) Gregoire, Austin (Shannon) Else: Dacey, Aiden, and Brody.

John Hayes had a great impact on the people he spent time with and will be forever missed.

No services were held at his request.

Published by Ravalli Republic on Sep. 5, 2021.
To plant trees in memory, please visit the Sympathy Store.
MEMORIAL EVENTS
To offer your sympathy during this difficult time, you can now have memorial trees planted in a National Forest in memory of your loved one.
MAKE A DONATION
MEMORIES & CONDOLENCES
2 Entries
I'm o sorry to hear of your Dad's passing. I will always remember his twinkling eyes and miss seeing him walk everyday. He was a fixture of Darby and I was just thinking of him the other day and wondering how he was doing. What an interesting and wonderful life he had. My thoughts and prayers are will you.
Raylene Smith
September 6, 2021
Remembering Johnny as a gentle soul. He helped Dad [Les Thompson] with many jobs, which included shoeing the horses for pack trips into Idaho drainages behind Lk Como. They planted fish for the Forest Service in the fifties. It seemed to me he was a friend to everyone.
Thea [Thompson] McKinney
Friend
September 5, 2021
Showing 1 - 2 of 2 results