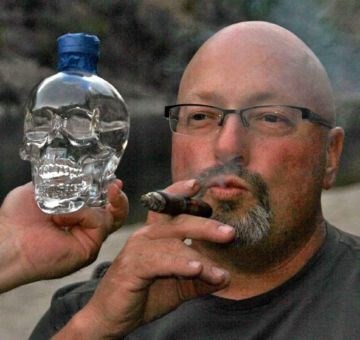 HAMILTON - Randy Craig Keith, 61, of Hamilton, passed away on May 29, 2021, due to complications from a heart procedure. Randy was born to Eddie Lee Keith and Nancy Katherine Keith (now deceased) on September 22, 1959, in West Plains, Missouri. He grew up running Missouri rivers in canoes with his dad and brothers, and he never got over his love of the water or his love for Missouri, which lately manifested as ardent support for the Kansas City Chiefs. Randy found himself in Montana in 1987 and never looked back. In Missoula in 1990, he met the love of his life, his "Sweet Coreen". He had talked to her a few times at work and on his 31st birthday, he put on his tightest black T shirt and blue jeans and gathered up his nerve to ask her out. Cory was not much impressed, but she was too sweet to turn him down on his birthday. They soon became soul mates, best friends, and lovers, were engaged a couple of months later, and married the next year, one day before his birthday. Upon Randy's untimely passing, they remained inseparable companions, deeply committed to each other and their family, and profoundly in love. If there was one thing Randy couldn't turn down, it was an outdoors adventure. Since he ran his own roofing company for 35 years (Keith Roofing and Siding), he was able to get his boss to let him take time off to go camping, fishing, boating, bird hunting, elk hunting, paintball competitions, mountain biking, snowboarding, white water rafting or whatever other fun there was to be had. He ran Lochsa Falls at every level from 6,000 to 22,500 cubic feet per second, and Cory was right behind him screaming and laughing and trying to hold on. He held to the Hunter S. Thompson saying that it's better to be shot out of a cannon than squeezed out of a tube. Randy ran the River of No Return twice, the Middle Fork of the Salmon twice, the recreational sections of the Salmon more times than you can count, the Smith, Blackfoot, Lewis, Bitterroot, Beaverhead, Missouri Rivers and more. He was the life of the party around the fire at night, always ready with a big smile, a bigger cigar, a bottle of good scotch to pass around, and a story that filled the air with laughter. He was also a camp chef extraordinaire and meals on river trips were judged on a scale from 1 to Randy. He served his meals with theatrical flair complete with costumes, big spoons, a Scottish Brogue and always dessert. The loss of Randy Keith will be deeply felt by the Montana Council of the Boy Scouts of America for whom he volunteered for 35+ years at levels from Unit to District to Council. He was most proud of being Course Director for Wood badge, earning his 4th bead, organizing and working the Bitterroot Rendezvous, and taking over 50 youths to the National Jamboree in 2017. His passion was teaching leadership and survival skills, and his life epitomized the values of scouting. The Boy Scout slogan is "Be prepared." But we could never be prepared for the loss of Randy. Randy was very proud of his wonderful family, of their successful and happy lives, and he lived to make good memories with them. The best times were when his kids and grandkids were along for the adventure. Randy turned back into a child when with his grandkids and it is hard to think that they will have to grow up without his love, play and laughter. Randy is survived by his wife, Cory Keith of Hamilton, MT; his daughter Shelay Keith, her husband Harper Cooper and their children, Mckiel and Charlie; his son, Jeremy Keith, his wife, Trista and their children, Kennadi and Everly; and Trichelle Keith, her daughter, Illiana, and her partner Kyle Cirincione. He is also survived by his three siblings: Jeff Keith and his wife, Tammy; Kathy Keith and her partner Renee; Dan Keith and his wife Michelle. We grieve greatly because Randy was a great man, a husband, father, grandfather, brother, and a friend to many. He touched many lives with his love, generosity, kindness, and quick wit. A memorial service to honor Randy's life will be held on Saturday, June 12th at 11:00 am at Daly-Leach Chapel with Chaplain Dan Dixson officiating. A reception will follow. Condolences may be left for the family at www.dalyleachchapel.com. In lieu of flowers the family suggests that memorials be made to the Boy Scouts of America, Montana Council, 825 W Spruce St., Ste A., Missoula, MT 59802